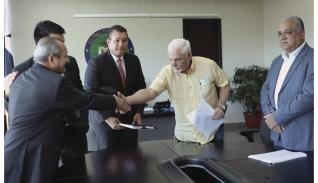 When a prosecutor or a judge knows about a case "it is because there are two parties in conflict and one of these will be very angry with the results."

This was expressed by former Attorney General  Ana Matildeo Noriega in  Gómez in reacting to the criminal complaint filed by former President Ricardo Martinelli against the magistrates of the Supreme Court Harry Diaz and Jerónimo Mejía writes Rodrigo Noriega in La Prensa.

In this  action, the former governor asks that Díaz and Mejía be investigated for the crimes of abuse of authority and violation of the duties of public servants, allegedly committed when the magistrates acted in the case of wiretaps  before the Court.

Martinelli demands $ 5 million to each defendant as compensation.

The complaint was filed four days after the extraordinary sessions of the National Assembly began, in which only the matters for which they were summoned by President Laurentino Cortizo can be heard: the ratification of three new chief magistrates and six alternates of the Court.

The Assembly will also have the opportunity to ratify the new Attorney General designated by Cortizo.

Mejía ran for a new term in the Court and has been mentioned as a possible candidate for the Attorney General's Office.

According to the constitutionalist Carlos Bolívar Pedreschi, Martinelli's complaints seek another purpose and, in his opinion, no matter what happens, " former president Ricardo Martinelli has more to lose than win with this complaint ."

The legal responsibility that corresponds to Díaz and Mejía for the detention in the United States, the extradition to Panama and the preventive detention of the former president is void, since it was the result of a collective decision of the full Court.

A simple revision of article 490 of the Criminal Procedure Code reveals: “ Precautionary measures . In the investigation phase and in the trial phase, it will be up to the Plenary of the Supreme Court of Justice to authorize the application of any precautionary measure restricting the freedom of the Deputy ... ”.

This means that magistrates Harry Diaz and Jerónimo Mejía lack responsibility for the deprivation of liberty that the former president had. Neither Díaz nor Mejía voted in plenary sessions that decided the extradition or provisional detention of the ex-president.

The former Attorney  Generl Ana Matilde Gómez believes that the action against the magistrates seeks to intimidate justice. "Whenever there are measures of coercion, co-confession or revenge against justice operators, judicial autonomy is further inhibited and the rule of law is destroyed," she said.

On Friday in Spain, the National Court will advance the process that follows the construction company FCC for bribes allegedly paid to obtain contracts in Panama during the Martinelli government.

Whatever the motivation of the complaints, they will produce fear in the justice operators at a key stage of these criminal cases, and will affect the selection of magistrates of the Court and of the Attorney General.

OPINION: Justice terrorized
1
MEDIAWATCH: Panama’s path to democratic hell
0
OPINION: One man’s judicial terrorism
2
OPINION: Biggest challenge since the Invasion
17
The "no untouchables" promise
5
A fugitive in search of impunity
1