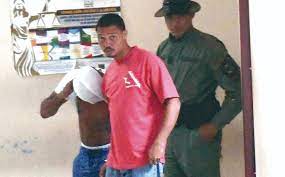 Two people on the Damascus operation's most-wanted list were ordered held in preventive detention by guarantee judge Ruth Aizpú Ramos,  at a hearing that ended at 3:00 am on Monday, December 6.

Carlos Ariosto Pérez Rivera and Victoriano Aguilar Becerra were charged with the alleged commission of the crime of money laundering and illicit association to commit a crime.

The Damascus operation is part of an investigation by the Special Prosecutor's Office against Organized Crime in which they are after a criminal network allegedly led, among others, by Carlos Roberto Aguilar, alias Robert.

On Friday, December 3, the authorities captured Aguilar Becerra an alleged member of the HP gang and Robert's brother. The action occurred in the Pueblo Nuevo area.

According to the prosecution, the HP gang is a criminal group responsible for activities of illicit association, hired assassins, drug trafficking, and illicit association and that would have a close collaboration with the Clan del Golfo.

The investigation began in October 2018, in which the prosecution located evidence against several people who allegedly participated in multiple criminal activities.