Sir Sidney Poitier, the first black actor to win an Oscar dies at 94 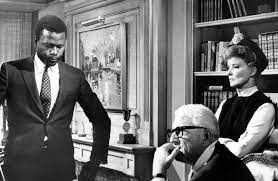 Sidney Poitier, the first black actor to win an Oscar and help break down the color barrier in Hollywood, has died. He was 94 years old.

Bahamian Deputy  Prime Minister Chester Cooper told ABC News he was "conflicted with great sadness and a sense of celebration when I learned of the passing of Sir Sidney Poitier."

"Sadness that he would no longer be here to tell him how much he means to us, but celebration that he did so much to show the world that those from the humblest beginnings can change the world and that we gave him his flowers while he was with us," he said.

Poitier became the first Black man to win an Academy Award for best actor in 1964 for his role in "Lilies of the Field." He was perhaps best known for his role as a Black doctor engaged to a white woman in 1967's "Guess Who's Coming to Dinner," in which he starred opposite Katharine Hepburn and Spencer Tracy.

I’m looking forward to murdering my countrymen in the coming civil war. I want to kill everyone not wearing a red hat. Especially black people. Because, I am a racist toothless hillbilly with a 5th grade education and lots of guns.

President Trump endorses these fine people: https://i.redd.it/937x4y49lba81.jpg I do too. Because I endorse insurrection, pedophilia, and adultry. And MTG looks a lot like a guy, which I find really cute in a traitorous potential fuck pal.

Damn. Did I say the quiet part out load again?

I mean, what reason could black Americans have for being political? They should shut the fuck up and let the white people handle all the political opinions. It’s always worked out well for them before. This one was uppity.

Good actor in a time before acting turn political