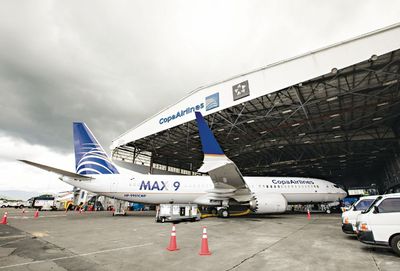 Copa  Airlines, which has six grounded Boeing Max 8 planes following its worldwide suspension after the two accidents that killed at least 300 people is not exploring  the acquisition of aircraft from another manufacturer say company spokespersons says a La Prensa report.

"We are in very close contact with the manufacturer, following and evaluating the MCAS certification process by regulatory authorities. The MCAS control system (Maneuvering Characteristics Augmentation System) is an automated safety function in the 737 MAX 8 designed to automatically connect and make corrections if certain parameters are exceeded in the changes of altitude and heading.

The certifications of this system are vital for the future of the MAX series. It is believed that the MCAS influenced the accidents of the aircraft of the Lion Air and Ethiopian Airlines the In both cases they experienced erratic ascents and descents and fluctuating flight speeds before crashing shortly after takeoff

In 2015, Copa Airlines and Boeing signed a $6 billion agreement for the acquisition of 61 aircraft.

In addition to the 6 MAX9 aircraft that the Panamanian airline maintains on the ground, last year it was to receive another 7 aircraft, a situation that has reduced the company's expansion and has led to reduced to important company markets such as Argentina and Brazil.

"We trust that the 737 MAX is a great aircraft, which will be even better after the exhaustive reviews and tests to which they are being subjected," said spokesmen of the company that last November confirmed that they did not expect to have their MAX fleet before March 2020

In recent days Boeing has delivered to the US regulatory authorities hundreds of documents that contain conversations of its pilots and technicians that show the discomfort that existed over the design and configuration of the projected new star within the Boeing models.

Currently, there are no clear indications that the suspension will be reversed during the first half of the year.

At the beginning of the year, it was learned that American Airlines and Aeromexico had agreed to a confidential economic compensation agreement to mitigate the losses caused by the suspension of the MAX fleet. Copa will discuss compensation “when the time is right.”

Customers need to tell Copa if its Boeing there not going