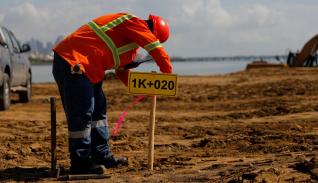 Work has begun on a $44 million project that will connect Cinta Costera 3 to the Amador Convention Center and the Cruise Port said the Minister of Public Works, Rafael Sabonge, during an inspection on Friday, January 7. “This is an important program for the tourism sector because it will allow greater access to the Amador Convention Center and to tourists who come on cruise ships,” said Sabonge.  It is expected to be completed in 18 months.

The official indicated that this project contributes to the economic reactivation of the country as about 200 direct jobs will be generated. Currently, there are 90 people working on the project, 30 of them from the El Chorrillo community.

The world will be a better place without you Brian. Do it.