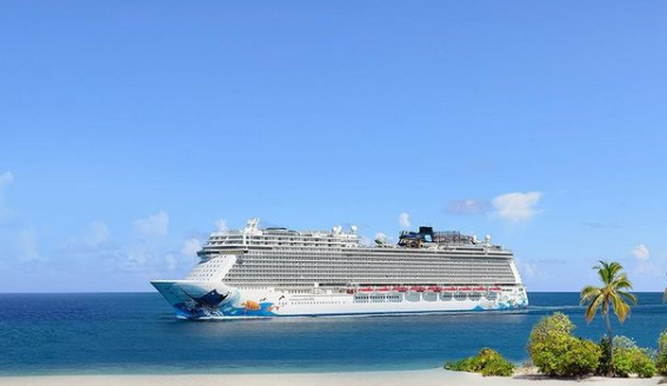 AFP The cruise companies try to erase from the collective memory the images of wandering ocean liners without a port to dock, and to

The year 2020 put an end to the irrepressible growth of the sector for a decade, reaching a peak in

2019, with 29.7 million passengers worldwide, of which 15.4 million of them were North American and 7.7 million European, from according to a report from the Cruise Line International Association (CLIA).

The pandemic meant the sector had $48,300 of losses, says Didier Arino, director of the Protourisme consultancy. "It is a sector that will not resume its normal activity until 2025", in his opinion.

Faced with a still uncertain health situation, the companies that timidly reactivate some ships are adapting their health protocols, advocating vaccines and tests.

The American Norwegian Cruise Line, which this summer enables three of its 17 ships on routes that

vaccinated" people to board.

"It is not one or the other, it is about vaccination and health protocol," said Harry Sommer, CEO of the

company, in a press teleconference, citing as an example the tests both when embarking and

In the United Kingdom, the Ministry of Transport imposes on authorized cruises as of May 17 with a

maximum capacity of 50% of passengers and a ceiling of 1,000, and mandatory residents in the

United Kingdom. On board, gatherings of more than 6 people will be prohibited and ships must be

limited to sailing in British waters.

DEATH BY INJECTION - THE PLAN TO EXTERMINATE THE "USELESS EATERS" EXPOSED https://www.bitchute.com/video/derAPsFsZbY4/ - It sounds about right to me and to think this was planned some 40 years ago, written and now he is part of the WEF.

The experience on ship will never be the same. Now they will check your temperature constantly. Limited seating on deck, nightly shows with social distance and limited seating, reservations in advance. Higher teir cruisers will get priority. Less food options and availability. Getting off ship only if you have booked an excursion through the cruiseline otherwise forget it. So draconian you might as well plan a vacation in Michigan or Montreal same experience but without the motion sickness.

Who would ever want to get on a floating petri dish at the best of time never mind now.

Is There Ever any Good News? https://www.armstrongeconomics.com/international-news/great-reset/is-there-ever-any-good-news/

They are going to push again to imprison people across the world. They are already imprisoning great numbers sadly who are suffering this torture by the police state leaders in those countries. I have talked with friends around the world they are exhausted, their kids are depressed and they are getting very angry now. Revolution is coming against the criminals behind these crimes as people across the world are sick of being told they are sick using fraud PCR testing. Never in mankind's history have people had to be tested that had no clinical symptoms for something that was suppose to be so deadly. Lockdowns another propaganda name for imprisonment, kill 10 times more people than the virus itself and destroy business and jobs, any political leader imposing them or police that enforce them are guilty of crimes against humanity. Political leaders have terrorized their citizens with FALSE PCR "new cases" daily with zero clinical symptoms in 99% of those cases. There is NO science that supports imprisoning people as effective, and imprisoning people has not worked in one country but succeeded in skyrocketing suicides, destroying jobs, increasing mental illness, killing more people than coronavirus through lack of proper medical care, bankrupted businesses and individuals in record numbers. "Quarantine is when you restrict the movement of a sick person. Tyranny is when you restrict the movement of a healthy person." The illegal edicts, rules and laws against Natural Law must end globally and the prosecutions of the criminals behind these great crimes and genocide started! People KNOW something is not right because if this was a real pandemic your neighbor to your left and to your right and all their family members would be dead and that is NOT HAPPENING! We are in a mind pandemic driven by fear propaganda to push the destruction of the economies so the demons behind the central banks can usher in their Totalitarian global ID through injections Great Reset which is not so great as the plan to have all of us own nothing and be happy about that by 2030. This is not conspiracy this is fact and what they promote globally is their agenda. They are working with the UN and invaded sovereignty of countries by enlisting individual political people to violate their local country laws and act treasonous against their citizens. This is criminal from start to end. https://www.bitchute.com/video/kTNQ31tG0VAp/ #1 You'll own NOTHING and you'll BE HAPPY! WORLD ECONOMIC FORUM: 8 PREDICTIONS FOR THE WORLD IN 2030 https://www.bitchute.com/video/ecgNBYpxQYm7/ From Australia Sky News: THE GREAT RESET - GLOBAL ELITE COUP https://odysee.com/@wayoftheworld:7/WEF:7 The World Economic Forum had to remove this video from twitter because humanity is rejecting their psychopathic vision. https://www.bitchute.com/video/0ropwe1ngo1i/ From Australia Sky News: THE GREAT RESET EXPLAINED IN 5 MINS https://www.bitchute.com/video/bMY9QF8YvuLW/ Discover the Multi-Decade Globalist Plan in 18 minutes https://www.bitchute.com/video/4YCGXHWNsfks/ 'THE NEW NORMAL' DOCUMENTARY

With unknown serious health risks of those who took the experimental injection viral shedding and harming those that have not taken this experimental injection. Unless they plan to have injected and non-injected cruises I just don't see the healthy non-injected willing to risk their families health. Until the injected are forced to be isolated, this is a serious issue that doctors across the world are raising. We have ZERO interest in going on any cruise until things go back to normal and all these risks of those injected are resolved and there are way to protect those of us not injected. There are private schools now that are not allowing experimentally injected students or staff back into them unless they can show proof they were not experimentally injected due to the serious health concerns of viral shedding, prion shedding as well as other serious unknown risks emerging globally.