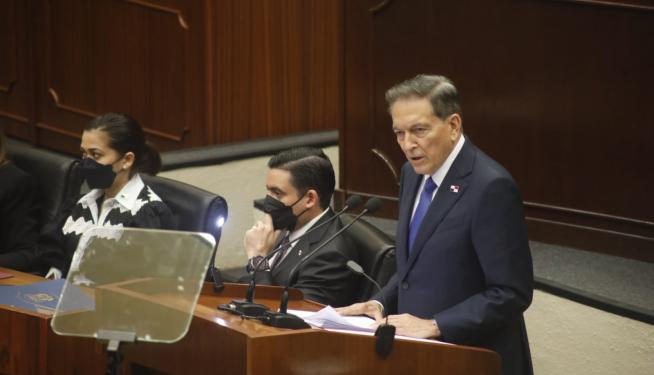 President, Cortizo, started the year 2023 with a report to the Nation where he gave very lukewarm details about important national problems such as the Disability, Old Age and Death program of the Social Security Fund (CSS ), economic recovery, and job creation reports TVN.

On the mining issue, he did not dedicate more than 5 lines to a matter of millions of dollars that in recent weeks has been the focus of local and international media.

He said that the Supreme Court declared Law 9 of 1997 unconstitutional, which approved the contract with Minera Panamá and that in 2022 an agreement was reached in which a contract with various aspects should be embodied, guaranteeing a minimum contribution of $375 million.

" The government's position is firm, in the sense of enforcing the Constitution ," he said.

Cortizo added that the final contract text that establishes a "fair" agreement was presented to the company.

For more than an hour, the President dedicated himself to reading a long list of more than 200 projects underway and to be tendered.

The president recalled again that, of the 42 months in government, he has spent 34 facing the pandemic. "The storm of storms, Never in the last 100 years has a government faced such a colossal and complex challenge, two hurricanes and the consequence of the war in Ukraine."

"I have had the honor of leading the country in these unprecedented circumstances," he said.

CSS solution
Regarding the Social Security Fund, he said that the Government is respectful of the entity's autonomy and hopes that viable options will emerge from the dialogue table that allows a response and that economic recovery will not be put in trouble.