One of 10 ‘most wanted’ copped with fake ID 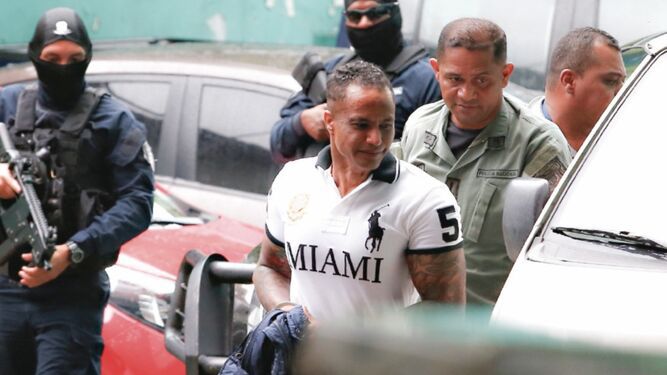 He will be brought before a Judge of Guarantees charged with document forgery.

Domínguez Walker, who had an outstanding arrest warrant for his alleged involvement in a group dedicated to drug trafficking, was, in Altos de Panamá, Condado del Rey.

The "Gallero" became one of the 10 most wanted in the country, with a conviction for money laundering and against collective security

Panama: Self-Made Man. Panama underground... anything is possible. By the way, get a look at the Polo shirt, caught my attention right away. What about his shoes? Either way... expensive! I wonder how he compares to the Panama National Assembly members? Hide the money... hide the money... the name of the game.

Panama: Wealthy Man from Appearance. Plenty of good sun tan and a drug trafficker... $money$. Good spirited and self-made confident with great connections. Here's looking at a classic movie star material guy. Judge will have pity on him and he can get on with his... $million$. Hide the money... hide the money, like a code of honor flag. Want to get to know him? Want to get rich? He's the man, rest assured. News reporting never showed his residence... nope, not at all. Puts everyone to shame, that's right. Swimming pool and palm trees near some great land acreage for... friends. Apparently, he knows how to regulate money... maybe he should run for... Panama president. Watch it... you cross him, you just might get yourself... killed. Can anyone see the profile? Certainly, something the police did not reveal! That's what corruption is all about... easy money and great connection with a... perfect tan. Oh, there's plenty of bail money. Something the news report will leave out because well... What more does Panama want, they got him. Really!!!