Homicides up 27% in “citizen security” era 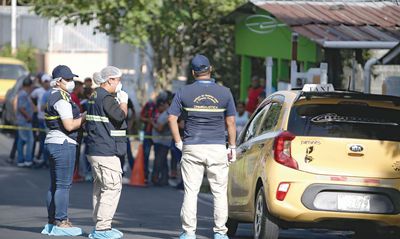 Quarantine and curfew restrictions in the wake of the pandemic have not slowed the rise in homicides with an increase of close to 27%  so far this year. From January 1 to May 14, , there were  217 killings.

January with 65 was the month with the most murders While February and March had 43  apiece and in April there were 32.

Feminicide
Meanwhile, between May 1 and 14, there were 34  homicides including 15 femicides.

Five of these cases were committed in the Ngäbe Bugle region, four in Panama, three in Panama Oeste, two in Chiriquí, and one in Coclé.

There were  171 homicides in the first five months of 2019, with May being the month with the most crimes: 38.

The figures show an increase of 26.9% this year.

Most of this year's homicides have been committed in Panama and PanamaOeste. Panama has already displaced Colon as the main killing ground and focus of criminal incidents.

Security authorities say most are linked to gang warfare and the dispute over drug trafficking routes. They even emphasize that this year they have seized more drugs than the previous ones.

“We are not going to be soft.  We already started in Colón, with 33 raids. There is a legal and strategic alliance with the Public Ministry for these actions. We have a solid public force, ”said the Minister of Public Security, Juan Pino, on Thursday, May 21 after making a tour of the police areas of Alcalde Díaz and Chilibre.

The tour took place a day after he participated with the head of the National Police, Jorge Miranda, and other heads of security groups in a meeting with Vice President José Gabriel Carrizo.

Pino is the second security minister of the  Cortizo government committed to “citizen security” The first was  Rolando Mirones, who left the entity in February, after the scandal of the escape of multiple murderer Gilberto Ventura Ceballos from La Joya prison.

Sara if the bad white man never came to Panama and built the canal where would YOUR PEOPLE BE TODAY?

Sarah successfully makes the connection between drugs and poverty, which is accurate. How this makes her a communist is some fuzzy logic and deviates from the point being made. There's been a trending tendency in these comments to label other people's opinions "communist" or "socialist" if they are not agreed with, but that only indicates an ignorance of the many nuances of the philosophies. Name calling does not make you correct. There is good and bad in everything, and that includes capitalism. We need to narrow down the source of the problem from "the white man" to the white politicians and lawmakers who have done more to nurture the drug economy than any poor people. Take a widely used substance, make it illegal, artificially inflate the price due to scarcity and risk, and criminalize poor people who want a part of the profits. That leaves those profits for those who made the laws, either directly or in the form of 'contributions', including those from the prison industry. This is huge amounts of money, not otherwise available to the general public and the resulting turf wars are predictable. There would be the same societal responses to making nicotine, sugar, caffeine, or alcohol illegal, as there is to cannabis and cocaine. These substances actually are addictive, so the response could be even more dramatic. The problem is not the poor people, it is poor law, intended to create exactly what's happening.

I am anticipating more property crimes and Medellin style express kidnappings here in the near future. When I was stationed years ago in Honduras I noticed people there didn't leave their homes empty, always some stayed behind or your house would be ransacked while you were away. I believe that this will be important for expat community going forward and we are easy targets here. I would also suggest dressing down, no fancy cars (JB'S Lexus), no watches, jewelry and no ATM cards on your person. Carry a small amount of cash for a taxi and your credit card for purchases. When I was assigned to the advisory task force in Colombia I quickly learned that robberies by motorcycle are quite common. Out of nowhere a motorcycle with 2 men pulls up along side your car in traffic and the passenger taps the glass on your car window with his pistol. you are being robbed of cash, phone and jewelry. If you don't open the window and comply they shoot you and drive off. They are never captured. Express kidnappings where you get into a taxi and then abducted taken to a place where a man dressed in plastic extracts your ATM pin # (don't carry ATM) and then proceeds to empty your bank account. whether they leave you alive is luck of the draw. Another version of this is home invasions where expats are tied and robbed, sometimes raped with getting your ATM # the prime goal. This type of crime has already happened in Panama many times. The normalcy bias is going to be a huge problem for expats who have lived here for many years with no problems. People will not want to accept that the newly impoverished Panama is now more dangerous, "that stuff happens to someone else". People like Tomcat who have another option to return to should consider it. Desperate people turn to crime and people will want to blame someone for their misery, in Panama the gringo is always to blame. If you must remain in Panama think security, harden your home and never leave it empty. Don;t go out at night and be aware of who is watching you. This advice is not given lightly and I pray my past experiences in dangerous parts of the world helps me to remain safe in Panama.

Oh, I have to comment on that idiot Sara. I usually enjoy reading the comments and very seldomly write anything, but when someone is so moron for so long and nothing getting to her, it makes me finally drop few lines. Sara (or whoever you are), if you are so big moron and so uneducated Chavinist, just stop trolling everyone. Just please crap in your own place without browsing the internet and getting between people with some reasonable opinion. If you have so big sentiment towards communism, just PLEASE go to Venezuela and make sure you stay there. You do not want? Then choose Cuba. And no I am not a gringo, but I was born in communistic s*hole and contrary to you I first-hand witnessed what it means. So stop spreading your clueless opinions and frustrations for the life being so bad to you.

Your an inspiration to us all JB my hats off to you. You know anyone who can smuggle my wife and I out on a flight?

Listen up Sara you communist idiot the white man didn't bring Poverty to Panama it was here from the beginning. As far a traveling I go where I want when I want! I work in the canal zone and have a Canal zone security ID. In addition me and my buddy at work took and made ourselves passes on department letter head saying we are essential personnel. We even put a regular transfer stamp on it because everyone knows that in Panama if it has a stamp it's legal LOL! I roll up to a checkpoint in my Lexus and show my ID and that Paper and I am waved through anywhere in the city. It works so well we made copies for my buddy Raul so he can still make our weekly 7 man poker game hahaha. There is no lockdown for me! If you can't outsmart a low IQ Panamanian you deserve be in lockdown. I bet that if you wiped your butt and then stamped the unused side of the paper , put it in a ziplock bag and showed the police both sides and told them it was an official covid sample they would let you pass because it has a stamp!!

JB there is the cuarentena so you are not out driving wherever you want. more gringo lies. There is crime here because of the poverty the white man brought to us! no complain of the crime when it is you who caused it with your lust for drugs

Just wait the economic depression that the lockdown is bringing to Panama will lead to a huge surge in all classes of crime. when I go joyriding I hit all kinds of roadblocks and checkpoints. seems that the police are watching the roads but nothing else. I try to ride through a different part of the city everyday to get a feel for how much activity there is. I do see some cops on bikes also in the poorer areas.

I would like to see the suicide numbers. Many people have lost the ability to survive but it seems no one cares. Yes the lawless will continue to commit crimes including murder. What about what the government is doing?

So, um...more Panamanians die from murder than Covid. The disease seems very, very scary (um...not. unless you're over 65). Just read the median age of death in the US was 81. LOL! https://www.youtube.com/watch?v=dC_lZLzCrOI

They gotta have a fancy name for everything nowdays "femicide". Why dont you just call it what it is, murder. I guess if covid doesnt get ya, then some gang members will.