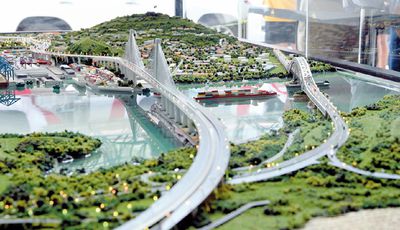 The redesign of the fourth bridge is 90% complete and that details of the final cost of the and its financing would be given in the coming days says  The Minister of Public Works, Rafael Sabonge .

The plan of the past administration to finance the $1.5 billion project was to obtain about $600 million through a loan that would be financed with the collection of tolls.

The original idea was that the MOP, once the construction of the bridge was completed, would hand over the infrastructure to the National Highway Company (ENA), which would manage the road through a new company called ENA Oeste.

Sabonge said that the plan is to start with the construction of the cable-stayed bridge this year, The Panama Fourth  Bridge consortium. is made up of the companies China Communications Construction Company LTD and China Harbor Engineering Company LTD.

Sabonge said that the final amount of the project and the construction term have yet to be defined with the contractor. He added that they already have the approval of the General Directorate of Public Procurement to make changes to the contract in order to include financing.

Engineers have warned a lag of at least 3 or 4 years between the commissioning of the fourth bridge and the expansion to 8 lanes of the highway to Arraiján, which would create a bottleneck at the entrance and exit of the Bridge of the Americas.

In February 2021, the Chinese consortium presented a financing proposal that would allow the construction of the project to continue.

The Panama Canal Authority collaborated with the MOP in the review of the redesign of the fourth bridge, a work that will maintain three lanes in each direction.

The original concept included ramps, accesses, and a new road, which together amounted to more than 40 kilometers of construction with 24 bridges. By separating line 3 of the metro from the fourth bridge, a percentage of this new road will not be built, changes that will be reflected in the new design.

Sabonge said that the ACP appointed two engineers with experience in this type of works to review the redesign of the structure.

He explained that within the ministry they are forming a team to supervise the work, and announced that they are preparing a tender to hire the external technical advisor who will be in charge of verifying that the contractor complies with the provisions of the redesigns.