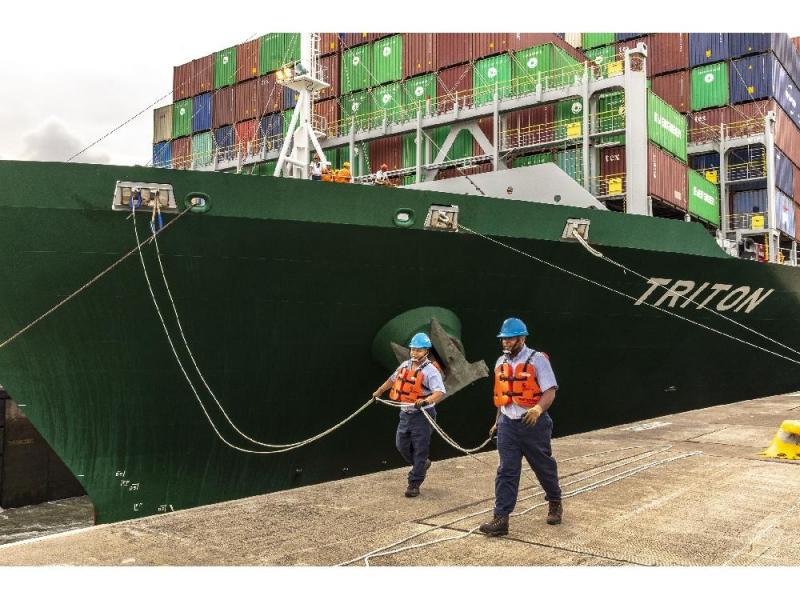 A new record of containers shipped on a vessel transiting the Panama Canal since the expanded locks were opened in June 2016 was set on Wednesday, May 15.

The container ship Triton from the Evergreen shipping company established the record of total TEUs (20 feet containers) allowed in the Panama Canal, with 15,313. The ship measures 51.2 meters of beam and 369 meters length and transited from the Pacific Ocean to the Atlantic Ocean.

"We are excited about the opportunities provided by the Triton transit test," said Panama Canal Administrator Jorge Luis Quijano. Wednesday's traffic exceeded the 15,000 TEUs mark by setting a record in terms of maximum container capacity for the Panama Canal, "he said.

“Like the transit of the Q-Flex ship last Sunday, today's achievement was possible thanks to the increase in the maximum beam allowed for ships using the neopanamax locks.

As of June 2018, the Canal will increase the beam from 49 meters to 51.25 meters due to the training and experience acquired by the team during the operation of the neopanamax locks for in almost three years. This expertise, coupled with close collaboration with the client, also contributed to the interoceanic route could receive the transit on Wednesday, despite the ship exceeds the maximum length of 366 meters of the neopanamax locks.

"The milestone marks a new era for container ships in the expanded Canal. We hope to continue collaborating on similar opportunities in the future, since the line services of container ships continue to redirect and consolidate the cargo in larger vessels, "said the specialist in International Trade of the Panama Canal, Argelis Moreno de Ducreux.

The Triton is located within the Evergreen Far East - East Coast of the United States (AUE) service as part of the OCEAN Alliance network, which connects the ports of Asia and the East Coast of the United States through the Panama Canal. The AUE service consists of 11 vessels that vary in size, from 8,000 to 14,000 TEUs. The Alliance includes China COSCO Shipping, Orient Overseas Container Lines (OOCL), CMA CGM Group and Evergreen, which are among the largest customers by volume of the Canal.

Previous record
The record for the longest container ship to transit the Canal by capacity was established on August 22, 2017, by CMA CGM Theodore Roosevelt, which measures 365.96 meters in length and 48,252 meters of beam and a total of TEUs allowed in the Canal of Panama of 14,863.

Of the 6,000 Neopanamax vessels that have transited to date, close to 50% have been in the container ship segment.