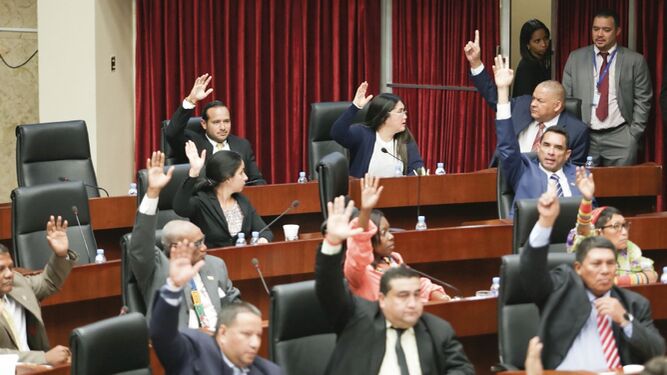 Companies like Odebrecht or those in the Blue Apple bribery scandal who have reached a deal with prosecutors will be able to bid for public contracts following approval of the  National Assembly on Tuesday of a Bill that creates a regime of public-private partnerships (PPP).

The text had already been approved in the second debate on September 4, but on  Monday, after opening the third and final debate - in which modifications can no longer be made - it was returened again to the second debate, due to differences over two articles.

One of them is Article 10, which determines the composition of the governing body of PPPs, the highest decision-making body on the projects that will be initiated.

There will not be a seat at the table for a representative of the National Assembly in the governing body, something that had been proposed by PRD  Deputy)  Benicio Robinson and approved in second debate last week.

Some jurists had indicated that the participation of a deputy in the governing body could imply an interference of the Legislative Body in another state power, which would clash with article 163 of the Political Constitution  reports La Prensa

The governing body will be composed of five ministers, with the Minister of the Presidency at the head, and the Comptroller General, who will only have the right to speak.

Other differences arose, over the disqualification of companies and individuals to participate in PPP projects.

A proposal signed by 18 deputies, including those of the independent bank, argued that a company should unable to contract with the State has reached a collaboration agreement for the commission of crimes against public administration, money laundering and against economic assets.

The PRD approved a wording in which companies that have reached agreements of collaboration with justice are not disabled, but the grounds already established in Law 22 of 2006 (of public contracts) are included, for example, the fact of having been convicted by a final ruling by a Panamanian court.

According to PRD Deputy  Zulay Rodríguez,, this would mean that Odebrecht, a company that reached a collaboration agreement with the Panamanian justice and which imposed a fine of $220 million, could not participate in PPP contracts until it pays the entire amount of the penalty.

However, the agreement between Odebrecht and the Public Ministry establishes that the payment of the sanction would be made over a period of 12 years, and technically the company would only fall into default if it fails to comply with any of the partial payments according to the calendar agreed with the Public Ministry.

Panama | Bribery Companies May Not Be A Bad Thing...Here's why. Panama should normally have their own businesses and construction contracts. Here's the problem: Say...Panama businesses are heavily invested and doing outstandingly well. Say...Panama has a thousand businesses with plenty of great economic growth. China...? China banks...well, they just buy it up and control the Panama economy much more...drastically! Drastically and Panama's economy plummets like...Venezuela! Panama basically is renting out businesses and suing for bribery scandals. Panama justices knows there is profits to be made with bribery scandals. Maybe that is why...the Panama justices are dismissing cases...encourages more lawsuits ($$$$)! Panama profits from scandals and continues with lawsuits...good for the legal industry. Does Panama really want to have extraordinary businesses and lose it all to China...(greed!). Panama knows the game and sacrifices has to be made with dismissals...apparently.