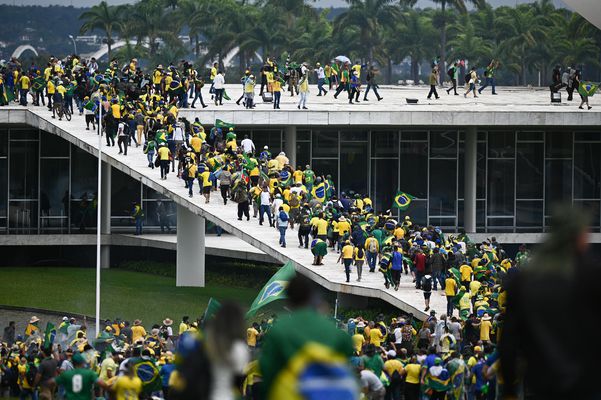 Followers of former Brazilian president Jair Bolsonaro invaded the Planalto Palace, headquarters of the Executive, and the Supreme Court on Sunday, January 8, after having previously broken into the National Congress in coup acts against President Luiz Inácio Lula da Silva.

The windows of the headquarters of the Judiciary and the National Congress were broken by the protesters, who already occupy the buildings of the three powers in the country.

Lula, who is visiting the interior of the state of Sao Paulo, was not in Brasilia this Sunday.

Patrols of the Legislative Police, which ensures security in Congress, were attacked and the barriers that cordoned off the headquarters of the three powers were destroyed by the protesters.

The anti-democratic acts called for the military intervention of the Armed Forces to overthrow Lula, who assumed the Presidency a week ago, on January 1.

The president, decreed federal intervention in the security area of Brasilia, after the chaos caused by thousands of radical followers of Jair Bolsonaro.

Lula appointed Ricardo Capelli, Secretary General of the Ministry of Justice, as controller, who will be responsible for the entire Security area in the capital until January 31 and will report directly to the president.

In a statement to the press, Lula said that whoever should have been in charge of security in Brasilia "did not do" his job.

The president also harshly criticized the "fascists" who invaded the headquarters of the three powers and caused damage to the buildings.

He added that the radicals have been "stimulated" by the former ruler and that they will "pay with the force of the law" for the riots caused, as well as those who have financed them.

Lula was this Sunday in Araraquara, in the interior of the state of Sao Paulo, to learn about the damage caused by the heavy rains in recent days in the region.