New light in the filth of impunity 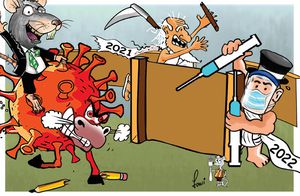 Starting next Monday, the Supreme Court of Justice will have two new magistrates, in addition to three others, with which for the first time, at least in the last decades, five ladies will make up the majority in the plenary session, of nine members. . After taking office, the agenda includes elections to renew the authorities of the Judicial Branch, in which one of the five magistrates also appears as a candidate. The renewal of the Supreme Court comes at critical moments, after a scandalous ruling that has deepened the enormous mistrust that exists in our justice and that puts the country at a crossroads in which chaos gains more and more ground in the face of indolence of judges who have preferred to muddy their names in the filth of impunity – LA PRENSA, Jan.1.

Regaining trust in the Electoral Tribunal
0
OPINION: An illegitimate dialogue
0
Time for former president to prove his honesty
0
OPINION: Transferring the problems
0
The dark shadows of a friendless former president
0
The shameful gluttony of the National Assembly
0