Local “rogues” receive double the pay of the president 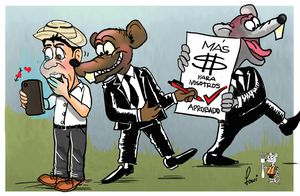 The voracity of mayors and representatives continues to surprise. In addition to the size of his income – undeserved in relation to his responsibilities – the payment of paid leave for five years is added. That is to say, that he is paid more than a magistrate of the Court for a job that, if anything, reaches mediocre, and also for another in which they do nothing. It is the institutionalization of shamelessness.

Knowing his current income: salary, allowances, representation and mobilization expenses, and now paid leave, a mayor or representative can earn more than $15,000 a month, more than double what the President of the Republic earns. Responding to these abuses must be difficult for the comptroller, since his deputy friends, after two weeks since they promised to summon him to the plenary session, still have not done so. Then, we will still not know how it is that after two years in office, the comptroller is the special guest at the waste party. At that same party and in the same condition is his accomplice: the President of the Republic, who remains silent – ​​arms crossed – after having authorized Decentralization funds to face the pandemic, and not so that these rogues become millionaires from the government. – LA PRENSA, Jan.17.