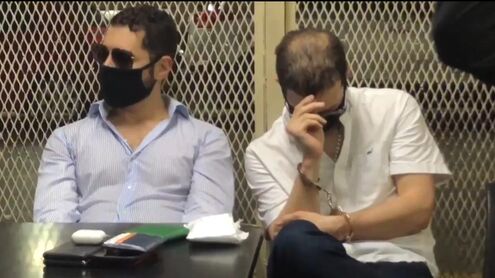 .A criminal complaint filed by a federal court in Brooklyn, New York, accusing the Martinelli Linares, sons of former President Ricardo Martinelli of participation in a massive bribery and money laundering scheme. money involving the Brazilian company Odebrecht is why the US  wants their extradition  from Guatemala where they were arrested on Monday, July 6

According to the Department of Justice, the brothers who are fugitives from Panama.   opened and managed bank accounts of shell companies in foreign jurisdictions.

" These secret bank accounts were used to receive, transfer, and deliver bribe payments (…) Many of these financial transactions were in US dollars and were made through US banks, some of which were located in New York, " says a Department statement.

The Martinelli Linares who will face a hearing of today before a Guatemalan judge served as intermediaries for the payment of bribes for an approximate amount of $28 million by Odebrecht to a former high-ranking government official in Panama, who is a close relative of the accused, says the statement.

FBI personnel in New York are conducting the investigations.

martinelli-sons fbi laundering corruption
Share
Previous Post
Door to new normal begins to open - you can get a haircut, buy a car
Next Post
New US head of mission has Panama track record

Some justice maybe instead of just-us .papa must be some worried . Will be interesting to hear the whole story

I was wondering what the reports were about them paying millions in bond money a few weeks ago, now I see. they knew the long arm of the u.s. was coming for them. let it be known the tricks that work here will not work in the u.s., so the HEY LOOK OVER THERE DEFENSE will not work, nor will the o I'm sick trick work either. you guys are looking at around 25 years in a good old America style jail cell and all those stacks of cash your family has won't save you either.

I'm an idiot, dont listen to me. Look at my posts today on NRP. Troll King

Is that you posting in me snake???? Thought you were leaving this forum to fight all the queers in texass.

Is Juego Vivo a legal defense in the United States?

These boys belong in jail. with me. 👙🌈