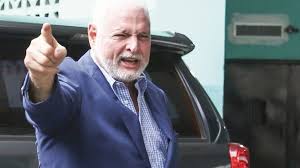 Ricardo Alberto Martinelli  Linares,42,  was extradited to the United States on Friday, December 10,  to face money laundering charges 492 days after his capture in Guatemala.

With Martinelli Linares, were three other subjects requested for extradition by the United States, on drug trafficking charges, reported Canal Antigua and El Periódico de Guatemala.

They are Iram Mérida , alias El Dorado or El Bucéfalo, and the brothers Haroldo and Marta Julia Lorenzana Cordón.

The flight plan included a stop in the Bahamas.

Shortly before 6:00 am, Martinelli Linares was transferred from the Mariscal Zavala military base (where he has been detained since his capture, on July 6, 2020), to the Guatemalan Air Force base.

t is the same journey that his brother Luis Enrique traveled on November 15, when he was handed over to the United States, where both are wanted for conspiracy to launder the bribes that Odebrecht paid to Panamanian officials and politicians.

On December 2, Luis Enrique confessed that, together with his brother and "others", he participated in a structure to launder $ 28 million in bribes from Odebrecht, to benefit "a high official of the Panamanian government." The accusation, which is being processed in the Eastern District Court of New York (Brooklyn), does not specify the name of that "high official", but does mention that he is a "close relative" of the children of former President Ricardo Martinelli Berrocal .

Luis Enrique is being held in a Brooklyn jail, without the right to bail. Ricardo Alberto would also enter this prison, once he arrives in New York
money-laundering extradition
Share
Previous Post
America Mourns Victims of Another Mass Shooting
Next Post
McDonalds withdraws from Russia