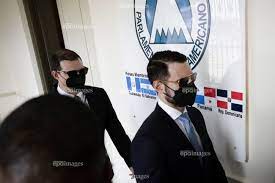 The brothers Luis Enrique and Ricardo Alberto Martinelli will arrive at the Tocumen International Airport, Panama, on Wednesday, January 25 at 8:00 pm, reports La Estrella from sources linked to the legal proceedings.

They will have completed the sentence imposed by the judge for the Eastern District of New York when they pleaded guilty to having used the financial system of the United States to transfer approximately $28 million product of bribes from the construction company Odebrecht, to what which the prosecution identified as a high-ranking official.

In front of the judge, the brothers confessed to having acted on orders from their father, the former President of the Republic (2009-2014).

The judge sentenced them to 36 months in prison and two years of supervised release. They will travel on a commercial line escorted by agents from the Immigration and Customs Department (ICE) who will process their deportation to Panama and deliver the respective documentation to Immigration personnel and the Judicial Investigation Directorate where the brothers will be notified about the cases they have pending in Panama where their lawyers have already cleared the way to avoid their entry into prison.

They each posted a $7 million bond, due to the links in the cases that are pending with the Panamanian justice system, Blue Apple and Odebrecht. In both files, they are accused of money laundering.

In March 2020, the Second Superior Court of Justi revoked the initial decision of the Twelfth Criminal Circuit Court of Panama, which denied a request for a release bond that benefited them from the investigation that is being followed in the Odebrecht case.

Sources from the Judicial Branch confirmed to Estrella that the bonds are still in force and that "the only restrictive measures applied are the prohibition to leave the country and periodically appear before the court for signature."