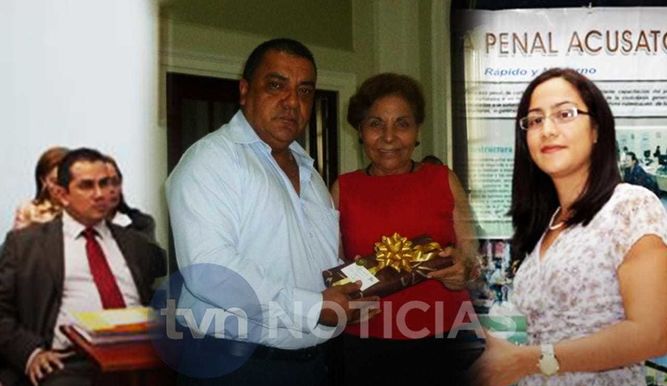 Paúl Vergara (left), Roberto Tejeira (center next to Mayín Correa) and Arlene Caballero (right) were chosen as judges of the trial of Ricardo Martinelli - TVN News

The three judges who on Friday, August 9 unanimously declared former president Ricardo Martinelli not guilty of illegal wiretapping and embezzlement sending shock waves through civil society had all been appointed to well-paid positions by the ex-ruler during his time in office and had close links to the CD party he founded and funded.

The judges who have since been castigated by political and legal observers including Transparency International were highlighted by TVN Noticias on Monday, August 14.

The judges were Roberto Tejeira, Arlene Caballero and Raúl Vergara, who one legal critic prophesied will go down in Panama’s history of a corrupt judicial system.

The presiding judge Roberto Tejeira was appointed by Martinelli in 2009 as an advisor to the Ministry of Government and Justice. Subsequently, he was Secretary-General and Deputy Governor of Panama, a position that reports directly to the Executive. The Governor he served with was MayínCorrea, who aimed to run for substitute deputy to Martinelli had he been allowed to run in the May  5 election. Instead, she was elected deputy. On August 8 and 9, and was in the courtroom as a faithful friend and co-partner of Martinelli.

Arlene Caballero was the reporting judge. Previously, she was the coordinator of the Office for the Implementation of the Criminal System of the Judicial Branch (OISPA) and then was secretary of the Criminal Chamber of the Supreme Court of Justice (CSJ) during the presidency of José Ayú Prado who also has close ties to Martinelli who appointed him as Attorney General and later as  Supreme Court judge . Ayú Prado declared himself disabled in the wiretapping case.

The third judge was Raúl Vergara, who previously served as the Eighth Criminal Circuit Judge of Panamawho handed down the conviction to the Colombian José Nelson Urrego, for money laundering. As a substitute magistrate of the Second Court, he signed the decision that condemned journalist Rubén Polanco for slander and insult in 2012. The sentence was annulled the following year when it was determined that Vergara did not properly support the conviction.

Vergara was the one who read the decision on August 9, in which Martinelli pleaded not guilty.

The journalist Rubén Polanco, victim and complainant in the wiretapping case filed a challenge asking for the three judges to be separated from the case since their impartiality was questioned. The Superior Court of Appeals denied the challenge.

Martinelli was charged with the inviolability of secrecy and the right to privacy, peculation, abuse of authority and against computer security. The prosecution requested 21 years in prison.

On  Monday, August 26, the sentence will be read. Subsequently, the prosecution and the complainants may challenge that decision through an appeal for annulment in the Superior Court of Appeals or an appeal to the Criminal Chamber of the Supreme Court

Only Tejeira looks close to Martinelli. Arlene Caballero was assistant for Harry Diaz, well known enemy of Martinelli, yet she also found him not guilty. So why did you skip to mention this in your article? Raul Vergara doesn't seem to have ties one way or another. To be honest, the journalist Polanco didn't add anything to the hearing. So question, if we're going to question all of this, shouldn't we also question the Superior Court of Appeals' decision not to change the judges? Shouldn't we also question how Harry Diaz and Mejia acted, considering they're well known enemies of Martinelli? Harry Diaz, as magistrate of the Supreme court went on a two-day television rampage trying to influence the court case against Martinelli. Is that even a proper way for a justice from the Supreme Court to behave? Or is it only that we only question the judges when they take a decision we don’t like? Apart from any of that, have you made an analysis that indicates that these judges in any way, shape or form acted in an improper way as judges? Pray tell, under WHAT basis should they have found Martinelli guilty, considering that under oath practically no one said Ricardo Martinelli did it except the secret witness. Said secret witness who was found to have committed perjury, therefore his testimony couldn’t be used. Please, I’d love to hear the reporter’s line of reasoning.