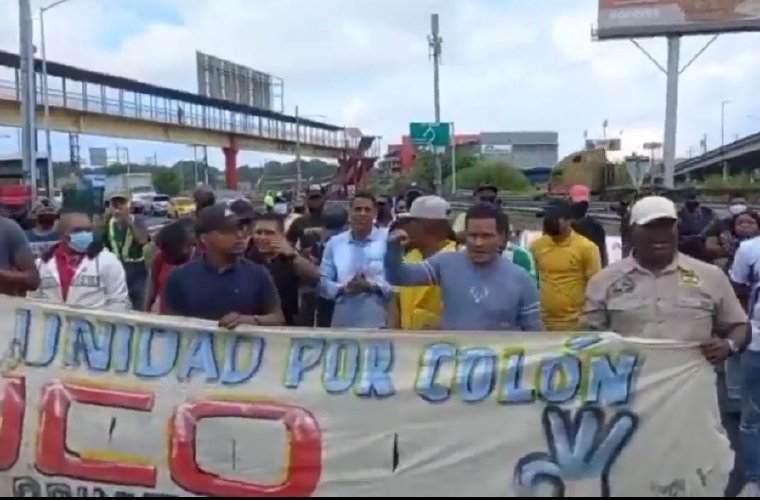 Colón is in turmoil: street closures, marches, businesses closed, and the railway was looted and is currently paralyzed. Schools have suspended classes, thousands of medical appointments have been neglected and there are huge economic losses in the province, where three important ports operate.

All governments have promised things and they do not fulfill them, and there is opportunism on the part of political actors who take advantage of the social situation and chaos begins,” said Diógenes Galván, community leader, and former independent candidate for Mayor of Colón

“The government creates what they call negotiating tables and in those tables, the commitments are not fulfilled, and what is being seen happens again, because this is the product of the non-compliance that was made on November 5, 2021, by the president” Galvan added.

The protests are commanded by various groups. On one side is the Coalition of Unity for Colon (Cuco), headed by Edgardo Voitier, a man who for years has promoted marches in social demands. They have been joined by professional guilds, educators, retirees, and the unemployed, among others. But there is also a faction led by the Colon deputy, Jairo Bolota Salazar, a member of the official caucus of the Democratic Revolutionary Party (PRD)in the National Assembly. He has been seen inciting protestors to throw Molotov cocktails and to defend themselves from the "repression" of the National Police that has intervened in the protests. “If they dare to oppress us be careful... we know how things start but not how they end. We don't want violence. If they are forcing us, tomorrow we are going to have to throw Molotov cocktails. We are going to answer them”, said the deputy before the cameras and microphones of journalists who interviewed him on Wednesday, May 11. He was surrounded by a mob that joined him in a chorus and shouted “Let's go to answer them”.

Sedition ?
For the criminal lawyer Rosendo Rivera, the role that the deputy has had in the midst of these events could become "in defense of crime and sedition", and recalled that he incited violence in the midst of the harsh clashes between the Police and protesters  Two police officed were injured by gunshots.

According to Rivera, what Salazar called for "public disobedience" is an action that is typified in article 360 of the Criminal Code, which establishes that whoever "with violence, intimidation or deceit" prevents or hinders a public servant from carrying out an act of his or her functions, shall be punished with a prison sentence of two to five years.