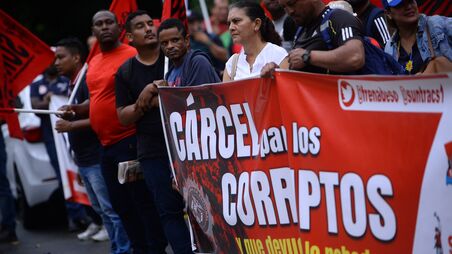 Undeterred by torrential rain that flooded many of the capital’s streets, scores of members of the National Front for the Defense of Economic and Social Rights (Frenadeso)   protested yesterday in front of the Supreme Court on Monday. August 12

Waving red flags they shouted slogans against impunity, and against the verdict of the trial court that declared former president Ricardo Martinelli "not guilty" of the accusation of political and peculated espionage.

"Prison for the corrupt and to return the stolen ...", read one of the banners

Frenadeso and related organizations held a press conference on Saturday, August 10, to repudiate the court's decision and, said that the ruling “is a mockery”, since they consider that the Martinelli administration (2009-2014) has been “one of the most repressive”, due to the events that occurred in the provinces of Bocas del Toro, with the so-called "Chorizo ​​Law"; and in Colón, with the attempt to sell the lands of the Colon Free Zone.