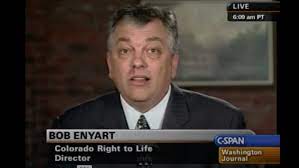 Yet another conservative radio host has joined the growing lineup of COVID-19 skeptics who have succumbed to the disease   Helorado's Bob Enyart, whom 9News describes as a "self-proclaimed 'right-wing religious fanatic'" who railed against vaccines and face masks, has died from coronavirus. The news was confirmed by Fred Williams, Enyart's co-host on the Real Science Radio podcast, on which the pair would "talk about science to debunk evolution" and, more recently, discuss COVID.

Enyart, 62,, had successfully sued the state of Colorado last fall over mask mandates and how many people could attend in-person church, in what the Denver Post calls "a rare legal victory against broad public health mandates instituted during the pandemic." Enyart—who once headed up Colorado Right to Life and has been a pastor at Denver Bible Church for more than two decades—and his wife, Cheryl, had said they were opposed to getting the vaccine due to their fears on how it was tied to abortion

The couple urged others to boycott the Moderna, Pfizer, and J&J vaccines to "further increase social tension" around that issue. Enyart has also been known to call for the death penalty for women who've had abortions, while Denver's Westword notes he used to "gleefully" read the obits of AIDS victims on the air while playing Queen's "Another One Bites the Dust."

Enyart's wife has also reportedly come down with COVID, though her condition remains unclear. "Bob Enyart was one of the smartest, and without question the wisest person I've known," Williams wrote in tribute on Facebook. "Heaven's gain has left an enormous hole here on earth."

Yo cukelly. You're saying that the GREAT African Dr Okosun has a phone number starting with country code 23? That's Moldova. Obviously you're a moron. Go back to school to look back at theat map of the world on the wall.

snake has 3 left nuts and no brains. Get another shot bubba.

I am out today to let the world know about this great man from Africa he is a good man and his spell work 💯 % according to your heart desire contacts him today and get your problem Solved because when I contacted him I thought it won't work but at last am with my husband today and with my kids all thanks to Dr Okosun you are indeed a great man God bless you' you can contact him via what's app +2348133974847 or Okosunspelltemple33@gmail.com...

I am out today to let the world know about this great man from Africa he is a good man and his spell work 💯 % according to your heart desire contacts him today and get your problem Solved because when I contacted him I thought it won't work but at last am with my husband today and with my kids all thanks to Dr Okosun you are indeed a great man God bless you' you can contact him via what's app +2348133974847 or Okosunspelltemple33@gmail.com

I got my shots and now I have 3 left nuts

We mourn every life lost to covid-45, and that poor guy was just one of the latest to learn, albeit a bit late, that the disease is not a NWO or BigPharma hoax. Fun to see copy/paste is still around.. The take-away from this article is: Karma is a Bitch!

I got both AZ shots. No problems. No clots. Go figure. "brian".....don't let the door knob hit ya bubba.

How about listing the names of the people who were killed from the Vaccine? Don’t you just love the one sided news??

You are next in line Brian. He would still be here if he had taken the Life Shot. Go back to Moscow Avakian ...NP was supposed to have blocked you

People double injected by the KILL SHOT from America & Israel one of the most injected locations in the world with record levels of death and ICU now going on their 4th KILL SHOT are BARRED FROM ENTRY INTO EUROPE!!! So much for the 95% to 98% lies by government murderers. The Lancet peer reviewed studies showed near zero protection. Don't worry the tyrannical killers are still lying as they change the definitions as people die in waves from the KILL SHOT! The world has never seen crimes against humanity like this EVER! READ & LEARN. I was right these past 2 years! CDC redefines ‘vaccine’ in wake of mRNA jab’s plunging efficacy https://www.lifesitenews.com/news/cdc-redefines-vaccine-in-wake-of-mrna-jabs-plunging-efficacy/ | FYI the only people I have ever heard dying are the ones admitted to hospital given the murder death KILL PROTOCOL...99% fatality rate once they vent you and blow your lungs up along with poisoning you and with holding safe and effective early treatment drugs. They are all criminals and will be arrested, prosecuted and executed for their heinous crimes against humanity.