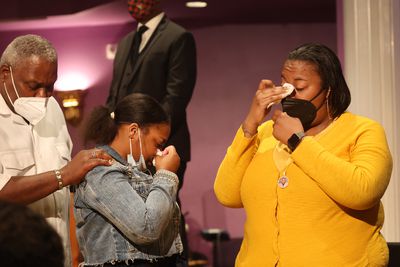 AFP. Buffalo . - Shocked residents of Buffalo, New York, gathered at vigils and church services Sunday to mourn the 10 people shot to death by an alleged white supremacist teen in an act described by authorities as "domestic terrorism, pure and simple."

The shooter, identified as 18-year-old Payton Gendron, was arrested at the scene of the tragedy, a grocery store in a majority-black neighborhood after police responded to emergency calls.

Gendron had driven to Buffalo, on the edge of Lake Erie on the Canadian border, from his hometown of Conklin, more than 200 miles away, police said.

He was arraigned Saturday night on a single count of first-degree murder and was being held without bail, the Erie County District Attorney's office said.

He was wearing a bulletproof vest and carrying an assault rifle, according to the local Police Department, which specified that of the 10 dead and three wounded, 11 were black. In addition, Gendron wore a helmet equipped with a camera to broadcast his crime live on the internet.

President Joe Biden On Saturday deplored the attack calling it "domestic terrorism" and a blow of "a disgusting ideology of white nationalism."

In moods ranging from anger to sadness, speakers denounced this latest eruption of racist violence and the ready availability of high-powered weapons, something that has become a sadly familiar scene across America.

Hochul,  a Buffalo native, described the crime as a "military-style execution" (and noted that racist messages were "spreading like wildfire."

Social Media
Speaking on ABC television, she described social media as "instruments of this evil" and said they allowed racist themes to "spread like a virus".

The attack stirred memories of some of the worst racist attacks in the country's recent history, including the 2015 murder of nine worshipers at a black church in South Carolina by a white youth, and the 2019 attack of a white man in Texas, which claimed 23 lives most of them Hispanic.

Among those killed inside the store was a retired police officer who worked as an armed security guard. He was able to fire several shots at the assailant before being shot, police spokesmen said.

The shooting is being investigated as a ” hate crime" and a "racially motivated case of violent extremism," Stephen Belongia, special agent in charge of the FBI's Buffalo field office, told reporters.

Local media linked the shooter to a 180-page manifesto that outlined a white supremacist ideology and laid out a plan to target a primarily black neighborhood.

In addition to mentioning the South Carolina church shooting, the attacker claimed he had been "inspired" by the gunman who killed 51 people at a New Zealand mosque in March 2019.

Gun Lobby
In the face of strong pro-gun lobbying, previous efforts by the US Congress to toughen gun laws have generally fallen short.