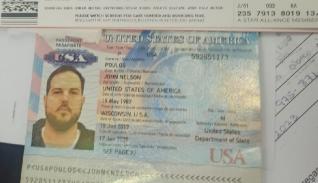 The National Police reported that Interpol Panama, arrested  US citizen Poulos John Nelson who was about  to board a plane to Istanbul.

The arrest followed an alert by the Republic of Colombia about, the alleged murderer of the renowned DJ Valentina Trespalacios. The Police said that but the security forces alerted the National Immigration Service, which prevented him from leaving.

The lifeless body of Trespalacios, a 23-year-old DJ, was found inside a suitcase, on Sunday, January 22, in the Los Cámbulos neighborhood, of Fontibón. The  Colombian newspaper El  Tiempo reported: "According to the first versions of the authorities, the young woman's body was found by a recycler inside a blue suitcase that, in turn, was inside a garbage container located in the vicinity of Los Cámbulos park, west of Bogotá.") She went out to party with her North American fiancé on Friday and Saturday, and she shared WhatsApp messages while at the disco," Carlos Trespalacios, the young woman's uncle, told the Radio Blu station, quoted by El Tiempo.