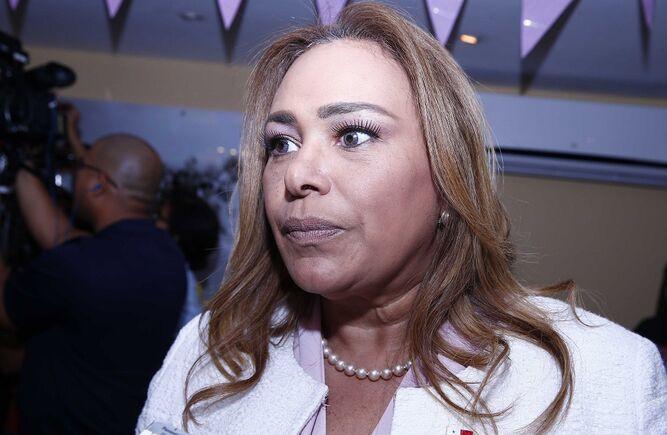 Minister of Health Counselor  Eyra Ruiz, who has been declaiming that “no one is above the law” is the latest official of the current government to flout the sanitary regulations imposed to face the coronavirus.

She participated on Monday, August 31 in a massive funeral of a leader of the ruling Democratic Revolutionary Party (PRD), in the church of Santa Ana.

Videos on social networks show dozens of people outside the church, some with flags of the ruling group, while the music of some mariachis played. The PRD flag was even placed over the coffin of the deceased, who was shot dead last week in an incident on the South Corridor.

A large number of people, of both genders, were appreciated in the church, reports La Prensa although as it was Monday, only women could attend the funeral. It is unknown if all those men present in the church had a safe-conduct. The two-meter distancing  rule  was also  not respected

Before going to the funeral, the minister counselor had offered an interview on Telemetro, in which she assured that the law would apply to everyone equally, and that "anarchies" could not be allowed.

Ruiz reacted on  Tuesday, September 1 with a statement, in which he says that he will face any investigation that is carried out.

In her note, she says that she only went to church to offer his condolences and that within the church the provisions of physical distancing and the rules established by the Ministry of Health (Minsa) were complied with.

“I waited inside the church for the coffin to come out, and then I left. I did not participate in any other related activity ”.

Earlier during the pandemic,  mourners at a funeral for a COVID-19 victim have turned away because there were more than six.

In recent weeks, authorities and officials have been involved in numerous non-compliance issues with current regulations to prevent the spread of the virus.

Ruiz was already linked to a meeting that was sanctioned by the Minsa: that of the leadership and the PRD bench, at Jimmy's barbecue, last June. Ruiz, as one of the vice-presidents of the CEN of the PRD, signed the resolution of the party that called the meeting, although - as far as it is known - she did not attend it personally. (The Minister of Labor, Doris Zapata, who is also part of CEN, did). The Minsa sanctioned the PRD and Jimmy's with a fine of $50,000 apiece. It is unknown if the fines have been paid.

Currently, a party at the La Fragata restaurant bar, in Obarrio, on the night of August 26, in full curfew, and the stay of the mayor of Colón, Alex Lee, in a residence in the Decameron, in the beaches of Río Hato is in the spotlight of the Health Ministry.

Before going to the funeral, Ruiz had anticipated that those who participated in a party at La Fragata Restaurant, including several public servants and those who protested outside would be punished. An official of the Presidency of the Republic even filed a criminal complaint against Mauricio Valenzuela, from the site Foco Panamá, for making a live broadcast from La Fragata.

The Minsa has instructed the regional directorates of Coclé and Colón to investigate whether Mayor Lee breached any rule when he was in the beach house during total quarantine..

A PRD flag was draped over the coffin!! Not a Panamanian flag but a PRD party flag! These PRD communists have taken power and care nothing about the country. Their loyalty is to the new communist party of Panama. Problem is that the average Panamanian with and IQ in the low 80:s hasn't figured it out yet!

Let me check my Surpise-O-Meter. Didn't budge. Real leaders, lead by example. Panamanians are getting a full measure of the politicians they chose for themselves. This will be the PRD's last term for awhile, although history shows there replacements will be the same. “The creatures outside looked from pig to man, and from man to pig, and from pig to man again; but already it was impossible to say which was which.” - George Orwell, Animal Farm