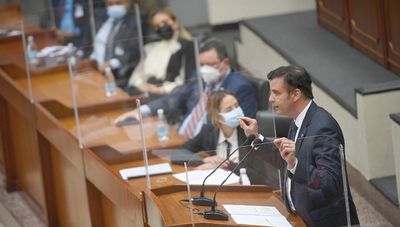 The  Panama chapter of Transparency International, has asked  the Comptroller General, Gerardo Solís, to refuse to  endorse the purchase of flawed ventilators delivered by order of the Presidency to four state hospitals.

They hat they were delivered with more than a dozen failures and at a high price.

In a letter delivered on  Monday 14 the organization refers to the journalistic investigation of La Prensa and argues that the resolution that created the State of Emergency does not mean that purchases are made without complying with current legislation regarding medical equipment.

The report revealed that 32 mechanical fans were delivered between March and April, part of an acquisition of 53 units , covered by a letter of commitment from the Presidency for a total of $2.3 million, so the average for each team was $43,400.

Letters from the biomedical staff to the former Health Minister Rosario Turner , revealed that the equipment arrived incomplete, with an expired ventilation circuit, and multiple failures, including a broken screen, a damaged card and its out-of- date software , but they have been gradually corrected .

The Dräger brand equipment was manufactured in 2013 and 2014, sold by the company Primo Medical Group Corp. , owned by Venezuelan executives, not authorized by the manufacturer for distribution and, not endorsed to sell intensive care products

In addition, it also breached an Executive decree, which states that those interested in participating in public events as contractors offering products for human health must be registered and with current certification from the National Registry of Bidders the letter says

" For these reasons and echoing the public outrage we ask you not to endorse this public act contrary to what the law indicates and that those responsible for the omissions face all possible administrative and criminal consequences of their acts, especially as the Public Ministry has  announced that it has opened an investigation into the case, ” says the note signed by Olga de Obaldia, the Foundation's executive director.

By all means if they have not been paid for already, don't pay. Offer to send them beck. And let those that took the bribe money worry about paying the company back for this scrap