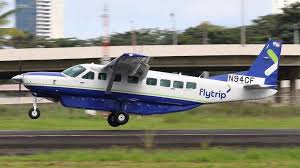 The first official flight of the Flytrip charter airline landed at the Tocumen International Airport from Bahía Piñas, Darién on Saturday, January 14 with 9 passengers and 2 crew.

Jaime Fernández, director of Flytrip, said that it is a new milestone for Panamanian aviation that a local airline can offer domestic flights to serve tourists who seek to go to Pedasí, Bocas del Toro, Bahía Piñas in Darién and the Las Perlas archipelago, from Tocumen.

"We come to give added value to the large airlines that bring international tourists to the country and who seek the ease of flying from Tocumen to national destinations.

Flytrip, formerly known as Arrendamientos Aeronáuticos, has been in business for more than 20 years, offering charter flights from the Albrook Marcos A. Gelabert airport.

Flytrip operates with three aircraft: A Cessna Grand Caravan Ex to serve 12 passengers and two Kodiak Quest 100, each with capacity for 9 people, in addition to the pilots.

Fernández said that after a technical process and inspections that lasted more than a year, Tocumen was able to give authorization to operate in the main terminal services are also maintained at the Albrook airport.

“We hope to operate a daily charter flight to and from Tocumen, depending on the number of travelers that require the service. We believe that this is a great step to promote Panamanian tourist destinations to the large number of people who arrive ."