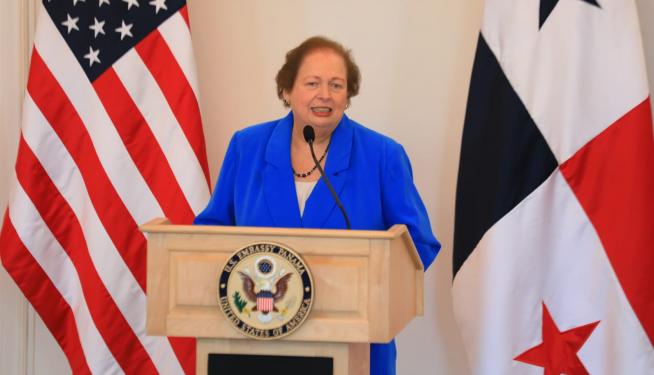 Mari Carmen Aponte, the recently arrived US ambassador to Panama, priorities are to help Panama fight corruption, address the issue of irregular migrants and attract investment from her country to Panama she told journalists at her public meeting on Monday.

Fighting corruption is key so that American businessmen can operate in Panama without giving a bribe so as not to violate the anti-corruption law of their country. In addition, having a stronger investment in Panama strengthens the bilateral relationship.

The importance of having close ties with one of its most important trading partners in the region also serves to narrow the gap to its business competitors that have a presence in Panama. China is one of them.

"I believe that as proud citizens of democratic countries we must recommit ourselves to promoting democracy in the face of the growing wave of authoritarian regimes in the region and other influences that come from outside.

The concern that corruption continues to undermine institutions and governance is intended to prevent Panama from looking in the mirror of other people subject to populist governments working "without respite" to face these challenges and guarantee democracy in Panama.

The region is going through the phenomenon of irregular migration that in Panama registers record numbers, with more than 200,000 migrants during 2022.

Aponte has planned a trip to Darién to observe first-hand the migrants and the organizations that serve them. "Panama is already in the big leagues globally and is facing irregular immigration proportionally and on a scale like countries in Europe and the United States," She said.

She said reiterated that the most effective way to combat the scourge is through regional and bilateral agreements. Previously, the United States insisted on improving the social and security conditions of populations at risk in their countries of origin through programs and funding for non-governmental organizations that address these needs. Trying to straighten out such complex issues will take time. Along the way, to meet the needs of countries, such as Panama, the United States improved from $4 million in 2021 to $18 million, the budget allocated to Panama in 2022.

"Migration must be managed in a humane, orderly, and safe way, as long as we can reach that goal we can provide relief in the problem," suggested Aponte. But there is no such route yet. To reach the north, migrants are victims of human traffickers, are extorted, victims of other crimes, and end up feeding the finances of organized crime, the main beneficiary of the situation.