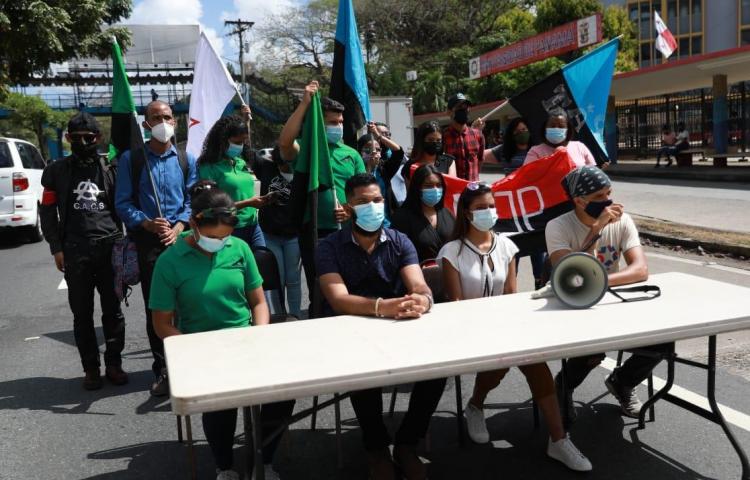 The 52  students and citizens arrested on Wednesday night, October 30, during demonstrations against constitutional reforms , declared Thursday morning before secretaries of the Calidonia Justice of the Peace. They will later receive the date and time for a hearing.

Among those detained were  Richard Morales, former presidential candidate for the Broad Front for Democracy (FAD) and Professor of Political Science at the University of Panama; and the journalist and political commentator, Franklyn Robinson.

The former attorney general and current dean of the Faculty of Law of Usma, Ana Matilde Gómez, who arrived at the office said the students did not commit any crime. "Nobody wants violence. The students have a critical thought and are part of this whole national event and freely decided to participate in a protest that was evidently peaceful,"

According to Gomez, the National Police made a "serious mistake" because they used a  virtual net and  took anyone as if they  were fishing."

"Our students, There is not a single evidence that our students participated in any act of violence but they were they were pepper-sprayed and tear-gassed" she said.

Robinson, meanwhile, said the police were arresting randomly and he was recording everything when  the police arrived throwing tear gas.

"On the Cinta Costera they grabbed me and threw me on the floor, they cuffed me and took  my cell phone. I told them that I had the right to record ... but they took me," he said.

Meanwhile, President, Laurentino Cortizo, said that 11 of the 54 detainees were foreigners.  "There are Cubans, Nicaraguans, one Venezuelan, one Italian, and the others I don't remember," he said.

You see how rough the "Tolerant Left" are when they are working for a one world government run by the EU masters. They want to take away your culture and give you their Godless version of how the world is supposed to be. First your guns- then their boot on your throat. And of course the article didn't mention what started the protests.