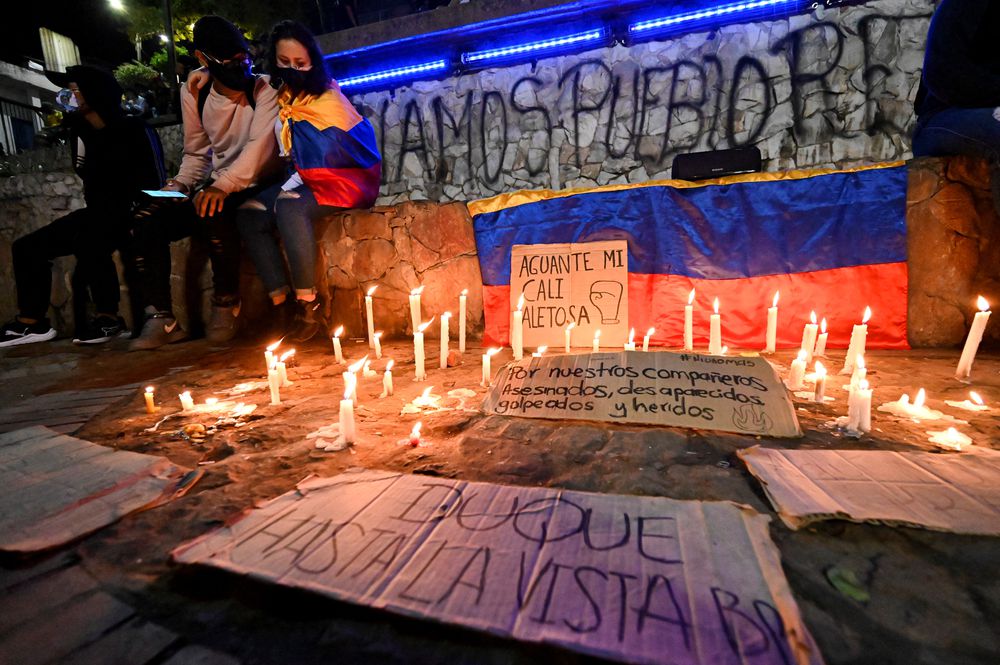 A vigil for the dead and disappeared

At least 17 people died and more than 800 were injured in the riots that followed five days of massive protests in  Colombia against a tax reform project promoted by the government of Iván Duque, authorities reported Monday.

According to the Ombudsman, 16 civilians and a policeman were killed in the demonstrations that began on April 28 throughout the country. The Defense Ministry in turn counted 846 injured people, of which 306 are civilians.

The authorities arrested 431 people during the excesses and the government ordered the deployment of the military to the most affected cities. Some NGOs accuse the police of shooting civilians.

Defense Minister Diego Molano assured that the acts of violence are "premeditated, organized and financed by dissident FARC groups" that departed from the peace agreement signed in 2016, and by the ELN, the last guerrilla movement in Colombia.

Pressured by the demonstrations President Duque on Sunday ordered the withdrawal of the proposal that was debated with skepticism in Congress, where a broad sector rejected it for punishing the middle class and being inappropriate in the midst of the crisis unleashed by the pandemic.

Despite the announcement, on Monday morning there were already people on the streets and roadblocks in Bogotá.

On April 15, the government presented a tax reform to Congress as a measure to finance public spending in Latin America's fourth-largest economy.

But criticism rained down from the political opposition and its allies, and discontent soon spilled out onto the streets.

With the reform, the government aspired to raise about $6.3 billion dollars between 2022 and 2031, to rescue the economy.

In its worst performance in half a century, the country's Gross Domestic Product (GDP) plunged 6.8% in 2020 and unemployment climbed to 16.8% in March. Almost half of the 50 million inhabitants are in informality and poverty affects 42.5% of the population.

Duque proposed on Sunday to draft a new reform project that discards the main points of contention: the increase in the VAT tax for services and goods and the expansion of the taxpayer base with income tax.

Colombia is facing a downgrade to junk bond status. The Farc Commander Petro will easily become president of Colombia and promptly follow turn Colombia into another Venezuela. Peru is about to fall to the hard left also. Panama fell first though with the PRD Noriega party now firmly entrenched and having the boot on the neck of small business and the average citizen. COVID was ready made for leftist control.

Sad how the failed leftist ideas of last century are making a comeback. Thanks Gerald for a very solid explanation of what is truly happening in Colombia

Bad move by Duque to raise taxes during an economic depression. The leftists led by former (some say still is) Farc Guerilla Gustavo Petro are taking a page from the well worn leftist playbook of the Democrat party. They are organizing riots and burning and looting in every city. Not allowing food or oxygen trucks to reach their destinations. Leftist mayors in Cali, Medellin and Bogota back these riots. The goal is to make the population miserable and to blame Duque. They hope to sweep Farc commander Petro into office in much the same way Biden got into office. Farc Commander Petro has strong ties with Venezuela lefties and we could witness the fall of Colombia by next year. Expropriation of properties and wealth redistribution, ie destruction, will become the norm. Peru also has a communist set to take control there and do the same. While the United States was playing in the Muslim sandbox the past 20 years the communists took control of the Americas.

You mean. All governments need to learn to live within their means. Most people do if they are not taxed to death or consistently manipulated by credit cards and the such. The US government is certainly a good example of that. They think the people are stupid.

All countries need to learn how to live within their means. The US a prime example