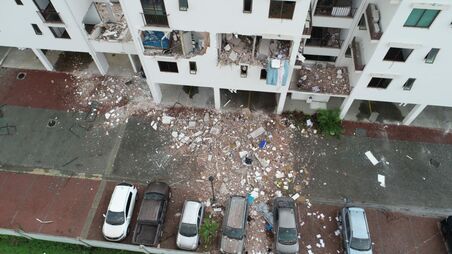 A  gas  explosion late   Friday night, in a five-story building of the Costa Mare housing complex in Costa Azul, in Don Bosco, injured at least 14 people, four seriously  including a mother and two of her children with severe burns in critical condition.

The  building is near to Colegio de Panama and the blast affected several adjacent buildings and was heard in Mañanitas, Don Bosco and  Tocumen International Airport. Units of the Fire Department of the Tocumen and Juan Díaz stations and a rescue vehicle from San Miguelito, ambulances and Sume 911 personnel. rushed to the scene.

Fire brigade personnel evacuated the wounded, who were transferred to hospital centers, including a 9-month-old baby and a 5-year-old   with burns to   75% of their body. The mother, 35, is in a private hospital and the two children are in the burns unit of the Hospital del Nino.

On Saturday, June 1 Units of the Civil Protection System (Sinaproc) and the  Fire Service, examined the structure of the building and declared it uninhabitable.

Residents have been moved to local hotels.