Cortizo gives the nod to fairs with vaccination cards 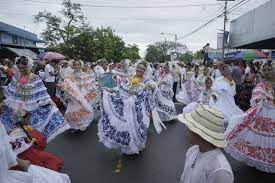 THE THOUSAND Polleras parade has been rescheduled.

The Ministry of Health (Minsa) reported on Thursday, December 30 the approval of President Laurentino Cortizo, of craft, cultural and agricultural fairs during 2022 and the rescheduling of the Thousand Polleras parade.

The installation of inns for food sales will be allowed, however,the provision excludes dances, discotheques, and traditional cantaderas.

To enter the fairs, it will be "mandatory" to present the QR code or vaccination cards with a complete scheme and comply with biosafety measures, such as mandatory use of masks, frequent hand washing, and physical distancing.

Provisions include the rescheduling of the Thousand Polleras parade, which is traditionally held in the city of Las Tablas, Los Santos province.

I, for one, can live without the “fairs”; but I wonder what hardships the people who put their money, blood and soul into their displays think about >40% of the population (without vax cards) being excluded. Oh, I forgot, financial losses don’t count as a casualty of restrictions.

@Dolega: You know who is fully vaxxed? Everyone who works at Fox News. Everyone who works for Donald Trump. Donald Trump and his entire family. Everyone in the US Congress and Senate. And you. You are vaxxed, Brian is vaxxed. Everyone who still has a job or has flown internationally is vaxxed. So really Russians, go to the Ukraine threads. Everyone reading our comical exchanges here knows who the bad guys are. The bad guys are the ones telling you to take vitamins to cure a virus. The good guys are the ones telling you to protect yourself from Russian propaganda.

Brian's mom has been watching too much CNN again. It really warps a persons ability to think rationally. Luckily except for Brian's mom and a few others CNN has lost all their viewers. I guess you can only tell leftist lies to people for so long until they wise up, Brian's mom being the exception of course.

Brian, tell all the nice people your true feelings about Vladimir Putin. How you hate him because of the bad pay, and how he is mean to gay people like you. And how you wish he would love you in that special way. You father will never understand. But I do.