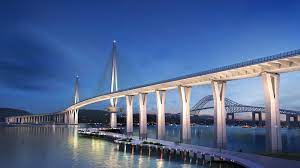 The Fourth Bridge Consortium made up of the companies China Communication Construction Company (CCCC) and China Harbor Engineering have resumed geotechnical studies of the area where the foundations that will support the structure of the cable-stayed bridge will be built.

The Minister of Public Works Rafael Sabonge explained that the works began after a preliminary agreement was reached to close the financing of the project that was paralyzed in March 2020, when the Government decided to separate the work from line two of the metro under the argument that the bridge did not have a source of financing for its execution.

"Redesigning the bridge was resolved quickly because it was a technical issue, but agreeing on the financing took us longer because there was no established source," said Sabonge.

The contractor received the order to proceed on December 3, 2018 and according to the contract, he would have 54 months to execute the project valued at $1.518 billion.

Sabonge announced that an addendum will be signed with the contractor in the coming days to establish the changes in the design that will reduce the cost by $248 million, as well as the financing structure where Banistmo, Santander, and Mizuho banks would participate and will carry out a bond issue.

If the addendum is signed in the coming days larger works on both sides of the Canal would begin in the second quarter.

To lower the cost, the restaurant was eliminated and the alignment of the structure was corrected so as not to affect the concession of the Panama Ports Company.

On the feasibility of having separated the work on line 3 of the metro from the construction of the bridge, the minister said the risk analysis showed it was the best decision.

Tolls likely
Regarding the payment of tolls to transit the bridge, no decision has been made, but The National Highway Company (ENA) receive a concession to collect a toll.

The postponement of the works of the fourth bridge would imply a mobility problem in the short term, taking into account that once the expansion works of the bridge of the Americas-Arraiján highway are finished, a bottleneck will be created. It will go from 8 lanes to 4 lanes when vehicles enter or leave the capital city.

If there are no new delays, the construction of the fourth bridge would end in 2028.