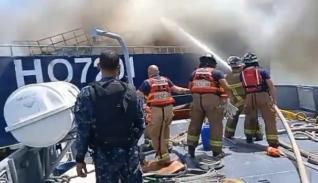 The Panama Maritime Authority (AMP) announced on Wednesday, May 11, that, it will carry out an investigation to determine the origin of the fires in three vessels. in the area near the port of Vacamonte, in the province of Panamá Oeste.

According to the AMP, at approximately 10:20 am this Wednesday a fire started in one of the ships belonging to the company Rocmar Seafood, SA.

The ship was anchored at a distance between 1 to 2 nautical miles from the port of Vacamonte.

The incident "has not caused injuries, but it spread to two other ships from the same company" anchored in the area.

The fire was controlled with the support of the Panama Fire Department and the National Aeronaval Service.

According to the AMP, there were a total of eight crew members on the three ships, who were rescued by another ship of the Rocmar company.