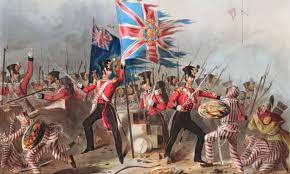 During the difficult years that preceded the British handover of Hong Kong to China the Chinese government's intense antipathy to opium and the still fresh memories of the evil that eighteenth century buccaneering Britain had inflicted on China and Hong Kong added an extra emotional charge to what, anyway, was a most complicated transition. Without opium there would have been no Hong Kong. The British only acquired it because of the Opium Wars, and the city's early economic success was built on the opium trade.

It was the British who fed the Chinese propensity for opium. Historians point out that the Chinese would have found it elsewhere, even grown some of it themselves. But the truth is the special Indian-grown opium was the brand the Chinese smokers savored. The British East India Company marketed it with commercial élan.

It is becoming ever clearer that the Chinese government has no time for the solemn commitments it made with Britain in the negotiations leading up to the return of Hong Kong to China in 1997. The commitment to preserve human rights, especially free speech and progress towards universal suffrage, has been dumped into the harbor. The selection last week of John Lee to be the next head of government, a pro-Chinese hard liner, is one more indication of this.

Shades of gray
Today the Chinese authorities regard opium as a singularly bad thing. On this issue, mainstream opinion is as black and white as a panda. But in Hong Kong, until now, there has been a public debate, shades of grey, and layers of complexity, both historically and currently. The study of opium has become as complicated as an addict's dreams and the solutions to abuse as tortuous as cold turkey.

The opium trade hit its peak in 1906, with 35,000 tonnes grown domestically and an extra 4,000 tonnes brought in from abroad. By that time, China had lost two wars over opium to “barbarians” from Europe, and its “celestial court” was fatally weakened. A whopping 13.5 million Chinese, out of an estimated population of 400 million, were hooked on opium, including 27 percent of the country’s male population.

It was the Communist revolution that expunged opium in mainland China. Mao Zedong with his political apparatus that reached into every hamlet and home was able, as he repressed so many attributes of human nature, both good and bad, to lay the beast low.

It was a mixture of carrot and stick. Addicts were not condemned but offered medical help and rehabilitation. But those who were uncooperative were sent to labor camps or imprisoned. Dealers were summarily executed, often without trial.

China was reasonably clean for 40 years until the demise of Maoism. Gradually opium has returned. Now China is one of the world's most important opium growers and consumers. When China started registering drug addicts in the 1990s the government said there were only 70,000 of them. Today, propelled by economic growth and a richer population with more money to spend, its addict population exceeds 3 million.

Although China still regularly executes drug traffickers, demand in its freewheeling economic society finds willing suppliers prepared to take the risk. As a Chinese proverb puts it, "If you open a window, sunlight comes in, but so do mosquitoes".

Government attitudes in China have not changed. But the market is a match for the government, as it is almost everywhere. The black market grows by the decade and repression, unless it is totally totalitarian, leaves enough loopholes for the determined to wriggle through.

The zeal to repress has become quite counterproductive, building up the wealth and criminal reach of the drug barons who have become so powerful that they often have a political influence that distorts, even threatens, good governance. By all accounts, their influence is growing in most parts of the world. The various types of control - from Europe's tolerance of soft drugs but toughness on hard, to China's rigorous policy on executing dealers - are clearly not working.

Informed debate
At least in Hong Kong, there is a reasonably informed and intelligent debate. In China, as in many parts of America and Europe, the debate is barely tolerated. In the West, by and large, it is finally being understood that opium is not heroin and marijuana is not crack.

Heroin addiction is in another league than opium. Towards the end of the nineteenth-century heroin, a derivative of opium was discovered by a German chemist working at the Bayer Company - the same laboratories that gave us aspirin. It is heroin that can cut an addict to pieces faster than any other drug, although let it be said that many people who have taken heroin moderately have lived quite productive and acceptable lives, witness the poet Coleridge. But, as with alcohol and cigarette smoking, users can get hooked- and there the trouble starts.

Unlike America, in most of Europe there is no longer any debate about its medicinal uses. This is why it is probably best to die from some painful cancer in a European hospice where the use of heroin as a pain suppressive, the strongest painkiller of them all, is allowed.

Alas, most people in the poorer parts of the Third World can’t afford the drug. Cancer patients often die in agony.

The truth is that neither China with its millennia of centralized government nor the U.S. with its technological prowess are a match for the drug traders. The tough policies of China, Malaysia, Singapore, and Thailand which execute minor traffickers have rarely touched the big barons.

We either do what Mao did - allow our governments to be simply totalitarian on this issue and implement a scorched earth policy - or we legalize opium and other drugs to break the back of the underworld trade. We then deal with addiction by educational and medical means. It is the present and almost universal in-between that is so unsatisfactory and so dangerous. Sophisticated Hong Kong with its intelligent policies on control of opium and heroin is now going to be forced to be integrated into Chinese-based legislation. We know China’s hard-line policies are counterproductive.

Pity the people of Hong Kong who will suffer Chinese rule in this, as in other things
opium heroin
Share
Previous Post
Panama press freedom ‘problematic’ - Costa Rica shines
Next Post
McDonalds withdraws from Russia