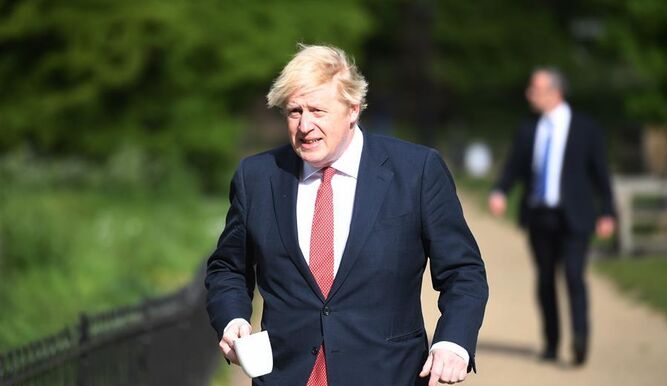 British Prime Minister Boris Johnson’s government is in a tug-of-war with teacher unions in the face of growing controversy over the planned gradual reopening of schools from June 1, as those killed by COVID-19 approach 35,000.

The United Kingdom, the country most affected in Europe by the coronavirus, has

registered this Saturday 468 new deaths from COVID-19, totaling 34,466, according to data provided by the Ministry of Health, which has reported the

detection of 3,451 new. cases to total 240,161 people infected with the coronavirus since the crisis began.

The expected reopening of schools is part of the conservative government's measures to gradually ease the confinement arranged in late March to contain the UK-19 pandemic of COVID-19.

The British Minister of Education, Gavin Williamson, reiterated on Saturday, at the daily press conference on the coronavirus, that the planned return of children to classrooms - in phases from June 1 - is based on scientific analysis of safety and thinking about the welfare of minors.

"Now we can start planning for a very limited return to school for some students as early as next month," said Williamson, who has made it clear that the first to return to class will be those aged 5 to 7. and those who are in the last year of primary school (10 to 11 years old), as well as adolescents between 15 and 17 who will undergo major exams in the British educational program in 2021.

But the fear expressed by parents and the unions that represent teachers has opened a debate on whether it is safe for school children to return to classrooms in danger of contagion.

The tension between the Executive and the unions led this Saturday to the Children's Commission in England, a non-governmental body responsible for ensuring the protection of minors, to ask the two parties to end this "quarrel".

Johnson who returned to  10 Downing Street after a two-week convalescence following his own bout of coronavirus was originally riding high on a sympathy wave, which seems to have evaporated after his recent speech to the nation accompanied by table banging as he changed the government message from stay home and protect the health service (NHS) to “stay alert” (to an invisible foe). He seems to have lost much of his showmanship flair and  there are whispered concerns among some of his backbenchers as he slides in the polls and the new Labour Party leader becomes the flavor of the month

Amen TC. The truth is that Boris has finally made brexit a reality and much of the left-wing psychopath world is angry about it. They will do anything to make him look bad, the way they do Trump. They think they are smart, using big words but there is no substance in their big words. Captain thinks he is an eye doctor now. Some day these left wing hypocrits will have to drink their own poison.

Amen TC. The truth is that Boris has finally made brexit a reality and much of the left-wing psychopath world is angry about it. They will do anything to make him look bad, the way they do Trump. They think they are smart, using big words but there is no substance in their big words. Captain thinks he is an eye doctor now. Some day these left wing hypocrits will have to drink their own poison.

This article is there to show that the British are just as ignorant as Panamanians. Both are willing to live in a bankrupt totalitarian state to escape the flu.

Regarding UK the teachers unions are one of the most powerful in the country and are always in conflict with whatever government. They have a lock on the industry unfortunately and it’s the children who suffer. It’s relevant news as it shows how Panama needs to be aware that unsuspected sectors of the community can undermine good intentions. Stop being myopic and look around the world to see how others handle the opening up process.

The coronavirus is a “pandemic” which means the whole world and so far Panama is still part of it even though some readers might want to live in a bubble. The debate over school openings is going on in many countries, particularly the UK and the US and health authorities in Panama will be following the results, as we move towards the “new normal” which may or may not include re-opening schools and universities. It would seem that the “hate” you find in a straight news report replicated around the world comes from your keyboard.

I think all Panamanians and foreigners should closely follow overseas developments in this crisis to avoid the myopic views expressed in these comments. This would ensure people are aware that we are doing no less than following generally international good practises. This, instead of being drip fed nonsense about dictators and revolts etc. Good grief, where do you get that from. Support the government and keep your politics out of it and if your a foreigner stop interfering in Panamas affairs.

DO you really think anyone with any sense in Panama cares even a little bit about those idiots in the government of the UK? Exactly what does this article have to do with Panama? Nada, zip, zero.

More anonymous hate news having exactly zero to do with Panama.