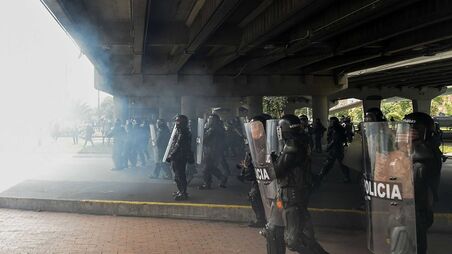 Riots on 26th Street in Bogotá, in which protesters shout slogans against  President Duque, who has low levels of popularity.

In several sectors of the Colombian capital of Bogotá, clashes between protesters and police were reported during the afternoon of Thursday, November 21, during nationwide protests against the policies of President Iván Duque who had promised a strong response in there were signs of violence.

In addition to Bogotá, riots were reported in Bucaramanga, Cali and Cartagena. Due to the situation, the local authorities of Cali decreed a curfew from  7:00 pm until 6:00 am on Friday

A national strike was called by unions, student unions, and social movements, who protest the murders of community leaders in several Colombian rural areas.