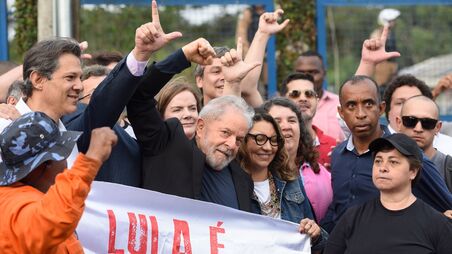 Former Brazilian president  Luiz Inacio Lula da Silva walked out of the Curitiba prison on Friday, November 8 where he was serving a sentence of more than eight years after benefiting from a Supreme Court decision.

The historic leader of the left the headquarters of the Federal Police, where he served his sentence since April 2018 and was immediately surrounded by a crowd of supporters who cheered him.

His sentimental partner, Rosángela da Silva, with whom he announced he would marry once free, hugged him

A sentencing judge determined shortly before "there are no grounds for the execution of the sentence", after the Supreme Court decided on Thursday that no one can be imprisoned as long as they have legal resources available.

The president of the Workers' Party (PT) , Gleisi Hoffmann, previously stated that Lula intends to "thank" people who performed a support vigil in Curitiba "for 580 days" and that one of his r first planned activities will be to visit the Metallurgists' Union on the outskirts of Sao Paulo where he began his political career.

The decision of the Supreme Court should lead the courts to examine the situation of some 5,000 people. Not all will be released, however, because the most dangerous cases have been issued preventive detention.

A lawyer from Lula, Cristiano Zanin, said:  "The decision of the supreme court gave him a light of hope that there could be justice.  Our legal battle, our focus, is to obtain the nullity of the process."

Lula was convicted as a beneficiary of an apartment on the coast of Sao Paulo, offered by a construction company in exchange for contracts in Petrobras.

But the former unionist denies the charges and considers himself a victim of judicial manipulation to prevent him from running in the 2018 presidential elections, in which the ultra-rightist Jair Bolsonaro was elected.

According to analysts, Lula released will strengthen both the worker's party  and, paradoxically, Bolsonaro, who knew how to capture the hatred of a part of the electorate towards the former union leader, even  promising to make the ex-president "rot in jail."

"For Bolsonaro it is good news, because it reinforces the ideological polarization that chose him. We will see Lula more present on the political stage and that will allow Bolsonaro to reinforce his role as leader of the anti-PT camp," said AFP News Agency analyst Thomaz Favaro.