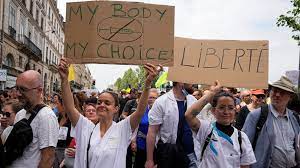 While polls show that the majority of French citizens approve of the measures to encourage anti-covid vaccinations and over two million have registered for the jabs since President Macron’s, Monday announcement thousands of people led by extreme-right politicians demonstrated ton Saturday in different cities in France to protest against the new anti-covid measures, such as the requirement of a health certificate and mandatory vaccination for health professionals.

In total, the Interior Ministry counted 136 concentrations in which 114,000 people participated: 18,000 in Paris divided into various demonstrations and 96,000 in the rest of the country.

"Freedom", "No to the health dictatorship", "Macron resignation" shouted thousands of protesters gathered on the banks of the Seine River, in the center of Paris, in one of the three protests held in the capital.

French flags proliferated among the protesters and some wore yellow stars, like the ones that Jews were forced to wear in Nazi Germany, with the inscription "health certificate."

"We are in a dictatorship, we are in a tyranny (...) This is called apartheid between vaccinated and unvaccinated," said prominent far-right politician Florian Philippot, who was at the head of the march.

According to a poll published on Tuesday, the measures announced by Macron are approved by the majority of the French.

Since the announcements, more than two million French people have booked a turn to get vaccinated against Covid.

Around 35.5 million people - just over half of the French population - have so far received at least one dose of the covid vaccine, while 27 million have received two.

ATTY THOMAS RENZ BEGINS LAWSUIT AGAINST US GOV FOR VAX DEATH COVER-UP "45K DEAD IN 3 DAYS" https://www.bitchute.com/video/PR9WdsBHrlwx/ | I cannot wait until the Nuremberg 2.0 trials begin. Millions need to be held accountable. ANY PERSON AT ANY LEVEL involved in this genocide must be held accountable for their crimes, arrested, prosecuted and swiftly executed!

I believe it is misinformation to label these protestors as “right-wing”. Truth be told, there are multitudes of left-leaning and independents who may or may not have accepted the “vaccine” but are opposed to vaccine passports which create an apartheid and division as well as they oppose the heavy-handed restrictions on everyone and the tyranny of the establishment.

MAN REACTS TO ' WOULD YOU LIKE THE DEATH VACCINE ' HE PROTECTS HIMSELF FROM THE EVIL AROUND US WATCH THIS OLD MAN STAND HIS GROUND https://www.bitchute.com/video/DFS2CsXr8IRn/ | ONLY 13% of the world has taken this poison genocide KILL SHOT! I can tell you this man represents the majority of the world right now who is willing to do whatever it take to fight back against these murderers! You dare get around BILLIONS OF US we the BILLIONS are going to protect ourselves from these murdering evil bastards. This genocide is about to be finished as to many of us know the truth now and refuse to be injected with this bioweapon!

MASS AWAKENING? - PROTESTS CONTINUE IN FRANCE AS NARRATIVE COLLAPSES! https://www.bitchute.com/video/KJRfe0Lilxtr/ | MASSIVE PROTESTS IN FRANCE AGAINST MANDATORY COVID-19 VACCINE https://www.bitchute.com/video/M8QS7uOMFbGM/ | Oh ya you are welcome. Let us address the very sicko Captain A hole. Remember folks these covidSCUM are extremely sick mentally as they are disconnected from reality. https://youtu.be/xWbCzyhJRuoThe “People are in a state of delusional psychosis on a mass level…a state of INSANITY” Dr. Mark McDonald Fear Pandemic

MEDICAL DOCTOR EXPLAINS BLOOD CLOTTING IN THE VACCINATED. VACCINATED PEOPLE WILL DIE WITHIN 3 YEARS! https://www.bitchute.com/video/zjF19U0e2q8x/ | Remember what you are going to learn means it is working exactly as genocidal criminals wanted!

Brian aka GRU agent Avakian is really pissed as the Russian embassy has told him he has to work Sundays. By the way Avakian got the LIFE SHOT back in March at the embassy clinic so he is as always speaking out of his backside. As explained elsewhere if 100% of the population are already vaccinated then everyone in hospital will by definition have been vaccinated. It’s the quantum numbers you need to follow not the %. There will doubtless be a few cases in the population who will still get hospitalised after vaccination but the quantum numbers would be small relative to size of population. Brian is either dumb or pushing Russian propaganda as usual …you be the judge of that

Brian aka Russian GRU agent Alexandre Avakian , is fond of quoting Dr Yeadon on this page . Note that so called scientific officer was never involved in this field of work with Pfizer and has been debunked by his own colleagues ( fired from the company in actuality ) . The number of pages calling his work rubbish far exceed any of those in support . However none of this suits “Brian ‘ & co so is never mentioned. Go check him out for yourself !

Captain A HOLE and the rest of you covidSCUMbags take your useless propaganda about the KILL SHOT and shove it your arses and lock yourself in your homes sickos. You repeat propaganda. HERE IS REALLY WHAT IS HAPPENING. *** 60% OF SERIOUS COVID PATIENTS ARE FULLY VACCINATED: ISRAEL*** it is a failure and Israil PM admits those who took the KILL SHOT not protected for Delta...why is that BECAUSE DELTA IS DEATH CAUSED BY THE KILL SHOT COVIDIDIOTS https://www.bitchute.com/video/8HzqoTGO1aU/

Doctor: Heart Failure From MRNA Jabs “Will Kill Most People” https://principia-scientific.com/doctor-heart-failure-from-mrna-jabs-will-kill-most-people/ | This is a GENOCIDE these criminals need to be arrested, prosecuted and executed immediately!