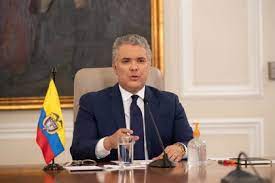 President Duque will be relentless with vandalism

Colombia will follow Ecuador, Chile, and Bolivia with massive street protests  on Thursday, testing the strength  of  President Iván Duque and  his policies reports the AFP News Agency

Unions, students, indigenous people, and opponents will join a great march against his government, which looks weakened after a year and a half in power.

With a diverse range of demands and claims, Colombian protesters join the wave of social unrest that is sweeping Latin America. without a common denominator, shaking ruling parties and leading to the deaths of scores of protesters.

"The peaceful social protest is a constitutional right, which we guarantee, but we will be relentless with acts of vandalism,"  Duque president told Candela radio

Dozens of military personnel were deployed in the streets of downtown Bogotá on Tuesday at the request of the mayor, according to Defense Minister Carlos Holmes Trujillo.

"What is being done is (...) to ensure that whoever wants to demonstrate peacefully can do so and to respond, if there are acts of violence, in accordance with the Constitution," Trujillo told Blu Radio.

The capital police reported about thirty raids that led to the capture of two people with explosives reported to have caused violence in previous protests.

In an unusual act, the immigration authority ordered the closure of the borders with Ecuador, Peru, Brazil, and Venezuela until Friday to prevent foreigners from entering to alter "public order and security."

Since Thursday the government has expelled at least 15 Venezuelans reported wanting to infiltrate the protest. Duque backed the United States in its  efforts to remove Nicolás Maduro from power.

With its popularity in the red, the so-called national strike will measure Duque's pulse, unable to consolidate majorities in Congress and whose party, the right-wing Democratic Center, met setbacks in the October local elections.

The great strike was called in  October by the Unitary National Command, which brings together the main workers' bodies, in the face of supposed government reforms to make the labor market more flexible and change the pension system.

Duque denies that he will present legislative projects for these purposes, although the Ministers of Labor and Finance have been favorable to such initiatives. The "protest has no other intention than to pressure the government ... to give them an answer to the problems of the working class," Julio Roberto Gomez, president of the General Confederation of Labor, told AFP.