Biden  celebrates “colossal advance” for The US 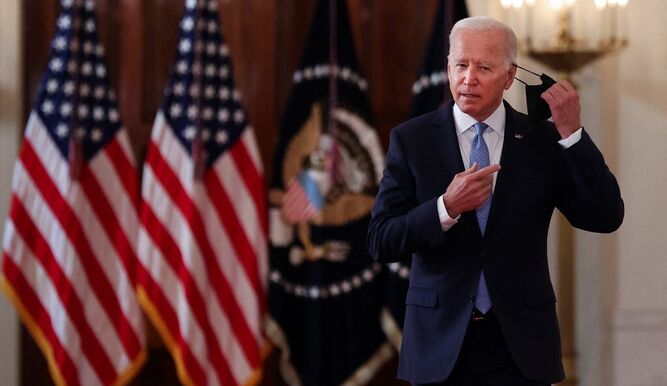 AFP, Washington - US President Joe Biden celebrated his first major legislative success on Saturday, following the difficult adoption of a vast infrastructure investment plan, but he has yet to overcome divisions in his party to pass the social and ecological component of his ambitious reforms.

"I do not think that it is exaggerating when to that this is a colossal advance for our country," the president assured in front of the cameras, his face visibly relieved after months of laborious negotiations.

He also said that he would enact this law "soon", for an amount of $1.2 trillion in investments to modernize the roads and bridges in ruins of the world's largest economy, as well as correct the country's delays in the installation of high-speed Internet.

Biden received the final endorsement of Congress on Friday night, thanks to the vote of the overwhelming majority of Democrats, but also a handful of Republicans.

"To all those who feel abandoned and marginalized by a rapidly changing economy: this law is for you," he launched, praising a "plan for workers" that will create "thousands of jobs" that "will not require a college degree. "

According to the Democratic president, the concrete effects will begin to be felt on the ground "within three months."

Biden desperately needed the victory as his popularity rating plummeted after a resounding electoral defeat for his party in the key state of Virginia, already a year into the midterm parliamentary elections, in which the Democrats risk losing their tiny parliamentary majorities.

The glass half full

The veteran ex-senator had to demonstrate his negotiating capacity, which had been praised so much during the election campaign against Donald Trump but which until now had not allowed him to overcome the divisions between the left and the centrists within the Democratic Party.

But the glass of his reform plans, which involve an investment of around $3 trillion in ten years to reshape the welfare state, is only half full.

Biden has not yet been able to convince a handful of moderate Democratic lawmakers to also vote for the $1.75 trillion of the social and ecological component of the plan, which provides, for example, daycare for all children, a profound improvement in health coverage and significant investments to reduce greenhouse gas emissions. Called "Build Back Better" (BBB), that device remains in limbo.

On Saturday, from the White House, the president recommitted himself to have Congress vote for him.

TOTAL BULLSHIT!!!!! TRUTHRFACTS WHAT A JOKE LOL! I BET YOU CAN'T EVEN TIE YOUR SHOE LACES TruthRfacts Selective memory of the Trump cult. 81 million Americans voted Biden. he is doing exactly what they expected him to do. OPEC? you mean Don the Con's buddies, Vlad his idol..Herr Trump was handed a thriving economy but he was concerned with giving tax cuts to his wealthy buddies, creating more billioniares in US history on the backs of working Americans. He ran up a huge deficit, Promised a healthcare plan extraordinaire, never delivered it, promised Mexico would pay for the nonsensical 'wall'..Suckers who support him paid for the wall along with every tax payingAmerican .Biden is undoing 4 years of disastrous polciies from the king of Grift- Trump.

TRUTH MY ASS YOU DON'T GOT AN OZ. OF TRUTH IN YOUR STATEMENT YOU MUST BE JOE BIDENS TOILET PAPER SO STAY IN YOUR PLACE ASS WIPE! YOUR STATEMENT IS TOTAL HORSE SHIT AND YOU KNOW IT!!! YOU MUST BE A DIE HARD LUNATIC DEMOCRAT FOR SUPPORTING THIS FRAUDULENT PRESIDENT JOE BIDEN, THIS IS A HIGH TREASONOUS CRIMINAL WE ARE TALKING ABOUT THE WORSE IN 200 YRS. IN THE HISTORY OF AMERICA AND THEIR HAS NEVER BEEN BENEDICT ARNOLD LIKE THIS SCUM BAG DEEP STATE OBAMA'S PUPPET. HE IS THE IMPOSTER WHO STOLE THE 2020 PRESIDENTIAL ELECTION WHICH BY ITSELF IS BEYOND TREASON HE SHOULD OF BEEN IN PRISON BY NOW WE ARE THE LAUGHING STOCK OF THE WORLD DUE TO THIS GRAND FKING IDIOT! HE NEEDS TO BE SEND TO GITMO!!!! AND TORTURE FOR HIS HIGH TREASONOUS CRIMES TO OUR COUNTRY AND THE AMERICAN PEOPLE. DEEP STATE'S COVID-19 MASS MURDERER. IF THE SHIT DON'T WORK STOP!!! THESE BIO-WEAPON COVID-19 VACCINES

Colossal Advance...why? Is he dead?!

Brian the GRU stooge has a gift for finding misinformation and garbage on the internet . Or rather his Russian stooges do . To publish items here from a convicted felon who served 11 years in jail for fraud is pretty much part of the course for Brian . If you check out any of his links they are always connect to nutcases or fraudsters ..the company of which Brian must feel very much at home with

This is the advantage of having a printing press. There is no limit to how many votes can be bought or projects financed because there is no limit to how many dollars can be printed and borrowed. The effect is inflation and a rise in interest payments and the result is a reduction in what people can buy with their work. But when the value of the dollar goes down in the US the new printed money provides some benefits. But Panama cannot print dollars so inflation of the dollar provides no benefits to Panama, just pain. These extreme expansions of US money supply should cause reconsideration of the tie between the dollar and the Balboa. There is no reason Panamanians should suffer the pain of inflation due to the reckless spending of another country.

Selective memory of the Trump cult. 81 million Americans voted Biden. he is doing exactly what they expected him to do. OPEC? you mean Don the Con's buddies, Vlad his idol..Herr Trump was handed a thriving economy but he was concerned with giving tax cuts to his wealthy buddies, creating more billioniares in US history on the backs of working Americans. He ran up a huge deficit, Promised a healthcare plan extraordinaire, never delivered it, promised Mexico would pay for the nonsensical 'wall'..Suckers who support him paid for the wall along with every tax payingAmerican .Biden is undoing 4 years of disastrous polciies from the king of Grift- Trump.

Creating thousands of jobs is that like the 55.000 jobs he killed on his 1st day in office shutting down pipeline construction and now he is sucking OPEC dick trying to get them to pump more oil. Yes folks you have a winner running the country but of course you know that when you pull up to the pumps and pay $5 a gallon.