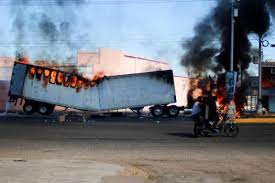 Days before the visit of US president, Joe Biden, to the North American Leaders Summit in Mexico, at least 29 people died from the violence unleashed  Thursday in the Mexican state of Sinaloa after the arrest of Ovidio Guzmán, one of the sons of Joaquín “El Chapo” Guzmán most wanted by the United States, the government revealed Friday.

The Secretary of Defense, Luis Cresencio Sandoval, said out that of the 29 deceased, a dozen belonged to the Mexican Armed Forces and 19 to criminal groups that generated the violent disturbances.

Some 35 soldiers  were injured by firearms, as well as damage to various land and air vehicles of the Armed Forces. 21 members of organized crime were also arrested, Sandoval detailed.

In the operation during and after the arrest of Ovidio Guzmán in the early hours of Thursday, 3,586 members of the Armed Forces participated, who also faced the violence unleashed in the streets of cities such as Culiacán (capital of Sinaloa), Los Mochis and Mazatlán.

López Obrador stressed that the Government acted in a "responsible" manner to "take care of the civilian population, so that there were no innocent victims."

In addition, he added that the governor of Sinaloa, Rubén Rocha, informed him that the situation in the region is normalizing, after suffering a day of blockades, attacks with bullets and cars set on fire.

The events in Sinaloa have aroused fear among citizens because they are reminiscent of the controversial "culiacanazo", an operation in which federal forces arrested Ovidio Guzmán on October 17, 2019, but released him hours later following violent acts by the Sinaloa Cartel.

Guzmán was transferred on Thursday night to Almoloya prison –in the State of Mexico, where his father was detained and from which he escaped in 2015.