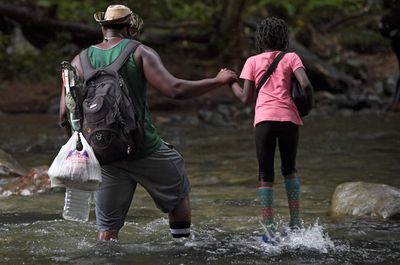 AFP – A record 19,000 migrant children crossed children have crossed the inhospitable and dangerous Darien jungle this year, between Colombia and Panama, en route to the United States, UNICEF warned this Monday, alarmed by that historical maximum.

"The number of migrant children who crossed the Darien Gap on foot has reached its historical maximum," despite being "one of the most dangerous places for migrants trying to reach North America," said a UNICEF report.

The flow of children registered "so far this year" is almost three times more than the number registered in the previous five years combined, "added the UN agency.

The Darien Gap, a 266-kilometer jungle area, has become a corridor for irregular migrants who, from South America, try to cross Central America and Mexico on their way to the United States.

More than 91,000 migrants have passed through that virgin forest, of 575 thousand hectares, in 2021, according to the registry updated to October of the National Migration Service of Panama, a figure equivalent to the total of the previous five years.

They are mostly Haitians and Cubans, although there are from various countries in Asia and Africa.

According to Unicef, one in five of these migrants are children, mainly from Haiti or from Haitian parents who had them during their stay in Chile or Brazil. Half of the 19,000 are under the age of five.