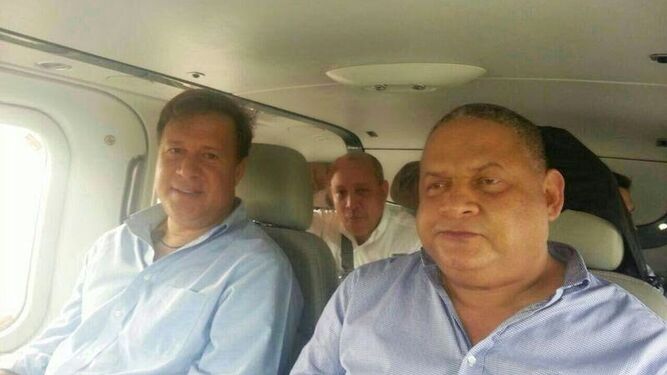 Varela handed Robinson control of the Baseball Federation and more

Getting the National Assembly to approve a $300 million tax exemption in October 2018, would have cost then-President Juan Carlos Varela, and the country, the disbursement of public funds to get the support of some deputies.

Alleged WhatsApp talks between Varela and his brother, the former deputy and president of the Panamenista party ,  José Luis Popi Varela  - then one of the most influential men in local politics –exposed  on the Varelaleaks site, reveal everything that the Executive would have given in exchange for the votes to pass the tax dispensation in the legislative commissions of Budget and Economy reports La Prensa

The negotiation included the delivery of 50 scholarships to each of the deputies; contracts in institutions, and five $300 Lottery books, apiece with the exception of Benicio Robinson, and Yanibel Ábrego, who at that time presided over the Budget Commission and the National Assembly, respectively. They both would have received 10 notebooks each.

In WhatsApp chats of September 2018, former president Varela would have complained to his brother that "Benicio asked for the baseball federation [and] was given it ".

Robinson, current president of the PRD was re-elected in the Panamanian Baseball Federation (Fedebeis) in December 2018, amid the scandal over the case of the Panamanian Sports Institute (Pandeportes), an entity that transferred at least $7 million to the Fedebeis, between 2014 and 2017.

This part of the conversation arises after Popi Varela informed his brother that he had met with Robinson and Abrego, and that the government "were offering pods that do not comply."

"In the end, I don't agree that they offer so many things ... tomorrow we'll meet Jorge González, Benicio, Yanibel and me," the ex-president's brother would have said. Jorge González was the Minister of the Presidency at that time

Popi Varela listed the Executive's offer: scholarships, supermarket vouchers, Lottery books, for example. "And Eydita offered contracts in institutions," he added. Eyda Varela de Chinchilla was, at the time, the Minister of Economy and Finance.

"Tomorrow we will clarify everything with Jorge. Benicio already promised me to unlock," adds Popi Varela.

Days later, they would have agreed to deliver the gifts listed.

But that group of deputies, according to the dialogues between the Varela brothers, would also have obtained "bonuses" or support "via FOIS

Nelson Jackson, president of the Economic Commission of the time, would have made a special request: the payment of a $70,000 debt he had with a hospital for his  daughter's operation.

The former president would have always emphasized that if they did not approve the waiver, jobs would be lost.

The chats have also recorded conversations in which Popi intercedes with  his brother for Luis Eduardo Camacho, spokesman for former president Ricardo Martinelli, either to give him an appointment, or to talk to him about Ricardo Martinelli. " Camacho has just left ... what he tells me is that this man is really affected psychologically … .