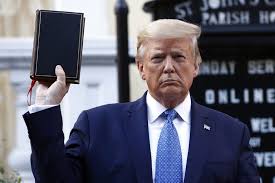 US President Donald Trump says he is "the chosen one" and many of his evangelical followers agree. But standing there, Bible in hand, in front of the historic St. John's Episcopal Church in Washington, after police used riot shields and tear gas to clear the area of ​​peaceful protesters, Trump had more in common with the donkey of Jesus. than with a savior.

Far from liberating a fallen civilization, Trump is pushing a society to its tipping point, creating precisely the kind of chaos that many of his evangelical supporters believe will precede - and require - the arrival of a messiah.

Trump ran for president in 2016 with a promise to "Make America great again." His November re-election campaign promises, with all the useless arrogance he's used to, "Keep America great."

Is it the same United States that is facing widespread protests over systemic racism and police brutality, where police officers who are supposed to keep the peace usually fuel violence? The United States where the police kill 2.5 times as many black men as white men?

Is Trump referring to the United States that is mired in the world's worst Covid-19 outbreak, where the death rates of people of color are much higher than those of their white peers? The United States where approximately 44 million people do not have health insurance and another 38 million have inadequate coverage? The United States that, in the Trump presidency, has lost the respect of its friends, allies and partners, and has become an international laughingstock?

To be sure, America's problems didn't start with Trump. The US health care system has long been broken, inequality has been growing for decades, police brutality has always been part of American life, and systemic racism is rooted in the very foundations of the country. America's claims to moral leadership were being questioned long before Trump entered the White House.

But if the United States was a powder keg of racism, inequality, and fractured politics, Trump lit the match - and then did not take charge of the fires it caused. "I take no responsibility," he said when asked about the government's slow response to the Covid-19 crisis.

Worse yet, Trump continued to add fuel to the fire. He played down the severity of the pandemic, encouraged anti-confinement protesters (mainly white and Republican), and touted unproven and potentially dangerous treatments.

When protests erupted nationwide after George Floyd's police murder in Minneapolis, he threatened to deploy the military against the Americans, prompting four-star General John Allen to warn that such a move could mark the "Beginning of the end of the North American experiment." And, with a clearly racist dog whistle, he repeated a phrase attributed to Walter Headley, the Miami police chief during the civil disorder that occurred there in 1967: "when the looting begins, the shooting begins."

Trump's behavior has been scandalous, but not surprising. He has exploited America's deepest flaws since he entered the political scene, stoking political and cultural polarization to appease his followers, including his major component of white supremacists. Meanwhile, he maintained control of the Republican Party with a conventional combination of tax cuts and deregulation that overwhelmingly benefits the wealthiest Americans and the big corporations. And, for four consecutive years, his administration has diverted public money from the social safety net and education to the military. America's defense budget today is the highest since World War II, with the exception of a handful of years at the height of the war in Iraq.

Why one might wonder, and rightly so, is Trump arming the United States to the teeth? After all, it has abdicated the global leadership of the United States and has allowed China to fill the gap without firing a single shot. Not only has it abandoned diplomatic standards, but it has also dismissed and betrayed allies, and it has intimidated countries with sanctions and threats. It has also withdrawn from international agreements, including the Iranian nuclear agreement (officially, the Joint Comprehensive Action Plan) and the Paris climate agreement.

For Europeans - who disagreed with Trump in most of these decisions - the United States is no longer a source of strategic or moral leadership. You may not even be a partner in the transatlantic community. The recent snub of German Chancellor Angela Merkel at Trump's invitation to a G7 summit shows how far relations have deteriorated. Only desperate cynics like Benjamin Netanyahu from Israel, evangelical liars like Jair Bolsonaro from Brazil, petulants like Boris Johnson from Great Britain and thugs like Rodrigo Duterte from the Philippines still enjoy Trump's friendship.

There is only one way to repair the reputation of the United States, regain the confidence of the allies, and ensure that the United States can act as an effective counterweight to China: address the root causes of the cracks that Trump's disastrous presidency has exposed and expanded. This is in line with the vision proposed in 2011 by two military strategists, Captain Wayne Porter and Colonel Mark Mykleby, using the pseudonym "Mr. AND".

Porter and Mykleby argued that national security depends not only on the ability to respond to threats from foreign powers but also - and perhaps more importantly - on the "application of credible influence and force." That influence, in turn, depends on the success of the United States in providing a "path to promise" for American citizens - and a model for the world.

That soft power requires the United States government to promote civil values, fuel competitiveness and innovation, protect the environment, invest in social services, healthcare, culture and education, and offer opportunities to younger generations. In other words, it should go in the opposite direction to Trump's agenda.

Trump is the antithesis of the type of leader who, for Max Weber, should "have the right to put his hand on the wheel of history." A large and growing percentage of Americans seem to recognize this: their approval rating has been declining for weeks. But a Trump victory in the November election remains a real possibility.

No one should be excited about what is at stake. Winning another four-year term could embolden Trump to act even more irresponsibly, including bordering on criminality, and make his toxic legacy end up being irreversible.

When Trump loses on Nov. 3rd, as now appears likely, will his gringo supporters who have been leaving Panamá come back?

And to Bill...is this the first time a president has had unfavourable press or an opposition party? NO!! You are a whiney little b---h just like 45...complaining about reality. Get over it!! Your priviledged world is being turned on its head. Be a part of it or go down in flames of unmitigated ignorance. Maga fools!!!!

Very very insightful essay!! I agree with everything said therein. However I will attempt to answer the question posited therein.." why does trump spend so much money on the military, given the total withdrawal of america from the world scene?" Given the chaos in america....unending protests by people of colour together with right thinking whites, continued umemployment, total mismanagement of the covid crisis and 45's utter and complete ineptitude, coupled with his extreme insecurity and narscisisim....he has ZERO chance of winning a FAIR election in November. So what does a man with his deep deficiencies do?? Declare martial law, bringing the beefed up military into the streets of america to take real white control of " an out of control country"....making america great again!!!! There was an article in The Hill only a couple of weeks ago written by one of trump's impeachment lawyers, Dershowitz, floating the idea. " Can the president declare martial law?" His answer...THETE IS NOTHING IN THE CONSTITUTION THAT SAYS HE CANNOT". So americans...beware! You arr in for an even bumpier ride. And all of those trump lovers here in Panama, like jbb and the fool whose thankfully brief diatribe precedes my warning need to leave us and go back to their beautiful country to be a part of their self-made chaos and demise. By the way, just read a piece about the govt efforts in Jamaica( you know...a "third world country" as you americans like to say) to combat the virus....awesome response and minimal deaths with country open again accepting tourists). America is finished!!

This is the big pile of crap. How is it possible to function as a leader of any Country when you have a bought and paid for media brain washing the public and an opposing Government attacking you no matter what you do. My question is why are they trying so hard to stop him?? What are they afraid of and what are they hiding from the brainwashed public. Trump 2020 all the way.

I have lived in Panama for 13 years but I vote in Florida. I have been voting in U.S. elections since Nixon and have never disliked a U.S. president, democrat or republican, until today. The situation in the U.S. is so disappointing. One thing that was not mentioned is American Blacks kill American Blacks more than any group. The results of a national survey of 9-million Americans from Civics: Question - Do you disapprove of President Trump? Democrats/96%, Independents/73%, Republicans/13% - Females/74%, Males/60% - Whites/73%, Blacks/86%, Latinos/66% - College Degree/60%, Non-college/56% - People over age 50/51%, Under the age of 49/63%. Therefore, the main Americans who support Trump are Republican White non-college men over the age of 50.