WORLDVIEW - The myths of immigration 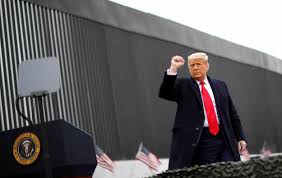 The Mexicans had a joke about ex-President Donald Trump’s planned wall along its border with the US. “It’s not being built to keep Mexicans out of the US; it’s built to keep Trump out ”  If this be so, then-President Joe Biden can relax. No longer is there the need to dismantle the wall built by Trump.

Today in the US media reports say that Mexico has to deal with another migrant “caravan” of fleeing Central Americans pouring into the south of the country, hoping to somehow crash their way into the US. However, the Mexicans have reacted sensibly and humanely to the caravan. They are encouraging the “caravaners” to go no further and find work in Mexico’s underdeveloped southern states. Those applying for asylum have been offered temporary work permits with immediate effect. (Colombia has recently implanted the same policy- and found it effective- to deal with its large influx from neighboring Venezuela, reports yesterday’s Financial Times.)

The Mexicans know from their history that development is the cure for migration. Thanks to economic growth the Mexican exodus to America has been reduced to a trickle. Trump didn’t talk about this. He used the Mexicans as a crowd-pleasing scapegoat for a phenomenon that no longer exists. He said that “they’re bringing crime. They’re rapists.”

The good news
The press has an unfortunate tendency to avoid the good news. For example, the increase in immigration globally is largely in line with the growth in the world population. It was 3% in 1990 and in 2020 was 3.5%.

It needn’t be so divisive, given good political, religious, and media leadership. In New York where 36% are foreign-born, the city provides ID cards for illegal migrants. There’s free health insurance for the children of illegals. Public universities provide tuition subsidies for illegals- as happens in 22 other states.

How many people are aware that in the presidential election when Hilary Clinton ran against Trump the counties bordering Mexico and most affected by Mexican immigration voted for Clinton?

The fact is Immigration can be good for us- if we have a positive attitude. Muslim Turkey is one of the most hospitable of all countries. It demonstrates what human kindness combined with self-economic interest can do. A survey carried out at the peak of the Syrian refugee crisis five years ago found that 73% of respondents believed that accepting and supporting refugees was a humanitarian mission. Mainly Christian Canada likewise welcomes immigrants and refugees, both skilled and unskilled- and they settle in.

There are many things we don’t understand about the public reaction to and the cost/benefits of immigration, but some important aspects have been researched in-depth:

There’s still much to be done to make immigration more palatable- an end to policies that stress multiculturalism at the expense of integration, which has led to ghettoization, which increases crime and degrades schools. And there is a need for job retraining for locals so that lower-paid immigrants don’t leap over the heads of unemployed locals.

Central America
Ever since the Kissinger Commission that evaluated Central American needs at the end of the local civil wars in 1984, there has been talking of the need for the US to give significant amounts of aid to get these countries out of the rut of poverty. But not much has been forthcoming, although when it does arrive it often produces sterling results. I once was taken to a farm project in El Salvador run by the International Fund for Agricultural Development that was doing really well. None of the farmers wanted to head north. Their neighbors did. This kind of aid is what the US should concentrate on, on a large scale. IFAD’s productive work can be copied.

According to a well-researched and perceptive book “The Age of Walls” by Tim Marshall, each wall constructed in different parts of the world tells a story.

There’s the wall between Israel and Palestine that provokes violent thinking more than it reduces it.

On India’s frontier with Bangladesh is the longest border fence in the world- 2,500 miles of it. It was built primarily to stem the exodus of poorer Bangladeshis to better-off India. But now fast developing Bangladesh is richer per head than India and the wall is becoming an anachronism.

India has another fence- the 340-mile long barrier along the disputed Line of Control inside Kashmir, a region both India and Pakistan say is their territory. “It stands as a fortified monument to the enmity between two nuclear-armed nations”.

In Europe some eastern countries have joined the fence builders. The Syrian war migrant crisis of 2015 prompted a wave of nationalism. Rather than agree to “burden-sharing” which if it had been implanted would have given each EU country only a modest number of migrants each, these countries preferred to say “no”, taking in barely a handful. Hungary built fences along its border with Serbia and Croatia. Slovenia erected a fence along its border with Croatia, Macedonia along its Greek border, and Austria along its border crossings with Slovenia and Italy.

The fences have ensured that the Mediterranean countries where the refugees land in their rickety boats have had to bear the most heavy load. Now the Syrian migration has been reduced to a trickle and African migration has slowed dramatically, but still the fences remain. But it’s unlikely there will be more large-scale wars in the Middle East. Even the one remaining, Yemen, has produced few refugees Europe-bound.

The African stream has long been over-magnified. Observers talk about Africa’s population increase and how this must inevitably lead to more northward migration. I wrote my first feature article about this in 1973 in the London Times (plus a series about how to find alternatives to immigration that used native European and US labor more effectively) and it has been going on ever since, but in fairly modest numbers. There’s still time to help Africa develop at a faster rate than it’s doing (much of it is doing rather well) and turn it into another Mexico where there are jobs and people prefer to stay at home.

Like Trump, right-wing politicians in Europe have raised the specter of endless immigration, from Africa, the Middle East and Eastern Europe. It was this that propelled the idea of Brexit to the forefront of the political debate. Without the hysteria over immigration Britain would still be in the European Union.

There’s still much to be done to make immigration more palatable, in particular, an end to policies that stress multiculturalism at the expense of integration which has led to ghettoization which increases crime and degrades schools; a minimum wage set at a higher level than at present and job-retraining for locals so that immigrants, accepting lower wages, don’t leap over the heads of unemployed locals.

On balance immigration is a good thing, although a sudden mass of refugees escaping war can be difficult to integrate. But Germany took in a million mainly Syrian and Afghani refugees and, although there have been exceptions- some increase in sexual crimes by frustrated young male immigrants- it has been regarded as a successful effort even by more conservative inclined Germans.

Fences and walls are not necessary. Mostly they are manifestations of superficial thinking. The Mexicans are right to tell a good joke!

WORLDVIEW - The myths of immigration
10
Smile of the day
0
Israel launches  “no vaccine no entry” badge ...
29

Ajd made the only cognizant observation of the J. Power piece. The rabid trumpian losers who constantly whine on this site are part of the population that is fading away. They loved the trumpian trope of bringing back the 1950s and now are steaming puddles of sorrow and misery because their fascist hero is out of power. As pointed out by another reader, the wing-nut Q complainers cannot point out anything of substance to counter the points made by J. Power.

Criticisms of the article would be more credible if they contained specifics. So far none do.

Criticisms of the article would be more credible if ithey contained specifics. So far none do.

If Powers is the best NRP can do, just pull the plug and retire. He is a terminaly left biased hack. I paid for news, not propaganda.

If Powers is the best NRP can do, just pull the plug and retire. He is a terminaly left biased hack. I paid for news, not propaganda.

It is obvious that the world-hate that consumes you right wing nutjobs continues to fester and grow. You are not even conservatives anymore. Just angry and bitter white men who see their world changing before their eyes and know not what to do. It is a proven scientific fact that the black gene pool is far stronger than the mutated white gene pool. Otherwise, why does just one drop of black blood make the subject black. Extrapolate that truth and you must see that the fear of people like snake pliskin et al, even if they do not fully realize it yet, is that the slow demise of the white race is inevitable. Add to that that statistics show that white people are not procreating at anywhere near the rate of people of colour and that in 8-10 years atleast 50% of americans will be clinically obese. So you see , the slow but inevitable disappearance of the caucasian is underway, despite the hate and vitriol expressed by the orange dotard and his equally myopic followers on nrp. The world is changing. Snake plisken, you would do well to realize that before it drives you crazier than you obviously already are.

I just saw on the news that Biden is back up to his old tricks and has kids in cages again at the border. Remember Obozo and Biden built those cages and then used fake news to blame it on Trump. USA will be 3rd world soon now that the hard left commies are in charge.

If I were an advertiser of Newsroompanama, I’d be seriously considering pulling my dollars if articles by Jonathan Power were published. He’s a hack with few, if any, redeemable content writing. I know, I know; some will claim he’s a world renowned journalist. Haven’t seen any quality come out of his subject matter in a long time ... like since he was published on this site.

Another stupid uninformed article by NP. Now with the 10 minute commercials, Its not even worth coming here anymore

Another stupid uninformed article by NP. Now with the 10 minute commercials, Its not even worth coming here anymore

3 days ago
The comments are the responsibility of each author who freely expresses his opinion and not that of Newsroom Panama.