WORLDVIEW: Saving the emerald forest one tree at a time 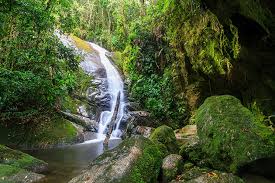 Belem is the Brazilian city at the mouth of the Amazon. Unlike its slummy counterpart, Kinshasa, at the mouth of the Congo, it’s full of resplendent streets with stylish nineteenth-century houses. It has squares and marketplaces replete with variegated cafes, pluming fountains, and the bustle of an interesting, cosmopolitan, life.

This large city grew up shipping rubber from the Amazon Forest, which begins on its doorstep. This made it wealthy. One can see the beautiful baroque Theatre of Peace, a fluffy pink building where Anna Pavlova danced. On the main square, ornate with pavements of black and white quartz, is the Hotel Grao Para where Xavier Cugat and his orchestra would play and Zsa Zsa Gabor would stopover on her way, by propeller plane, on the slow flight to Rio. Then there is the magnificent opera house which once attracted the best singers from Europe and North America. Now beautifully restored, following a period of hands-off neglect and decline, it is attempting to do the same again.

By now we all know the forest has been milked of much of its wealth and, as wildfires sweep across its mammoth area, cattle farming and illegal logging are having a field day under the very right-wing president, Jair Bolsonaro, who is tearing apart the legacy of the great conservationist ex-president, Luis Ignacio Lula da Silva, (who is now running again for another term).

Less well known is that it is now 70 years since Pierre Gourou in his seminal book, “Le Monde Tropique”, warned that the tropical forest is not, as it appears, a farmers’ and ranchers’ paradise. It’s a fragile environment and only the Indians in Brazil, with their shifting cultivation, have fully come to terms with it- farming in a way that protects and preserves the forest.

Cutting such a forest down- it is the same in the Congo, Indonesia, India, Madagascar, and China- and introducing modern methods of intensive agriculture or cattle-rearing leads to its ruin. Without the protective cover of the umbrella canopy, the soil will turn soon enough to rock, laterite or sand.

Gabon, home of part of the rainforest in the Congo basin, is one of very few countries whose leadership understands this. It is using its plentiful oil money to fight the ravages of deforestation and restore the forest cover. (Interestingly, this francophone country has a white Britisher as its environment minister who used to work for World Wildlife Fund, Professor Lee White. He has been honored by the British queen for his work in Gabon.) Colombia, another country of the Amazon basin, has also a coherent pro-forest plan.

Yet still, in many parts of the world, not least Brazil, the lesson is unlearned. Within a few hours’ drive from Belem along forest back-roads, but well within reach of the local administration, one can see new attempts at large-scale forest clearing, as settlers from Brazil’s central, north-eastern and southern states attempt to develop pasture for cattle. Every minute of the day three football pitches of forest are cleared away. Last year in Brazil an area 7 times the size of London was cleared.

John Boorman’s great piece of cinema, “The Emerald Forest” portrayed the magnificence of Amazonas. Made 38 years ago it warned us that the forest was rapidly disappearing. Boorman was the David Attenborough of his time. The film was certainly noticed- its shimmering photography saw to that- but the impact on politics was practically zero.

Still enormous, still overpowering, dense, and in parts near-impenetrable, the jungle is being eaten into or burnt away too fast both for Brazil’s good and for mankind. It’s the planet’s largest lung, producing 30% of our planet’s oxygen supply, and is one of the great repositories of plants that can produce some of our most important medicines.

However, illegal gold miners, loggers, and ranchers have been an important part of President Jair Bolsonaro’s electoral base. Until very recently, he has played almost entirely to their gallery. However, in August, he announced plans to hire 700 more agents to monitor the forests and in Glasgow Brazil voted for the new UN resolution on preserving forests.

Stock of species
The Amazon contains around one million forms of plant and animal life, 10% of the Earth’s stock of species. A single hectare of the rain forest can contain up to 230 species of tree compared with 10 to 15 normally found in temperate forests.

Tropical forests the world over produce essential oils, gums, latexes, resins, tannins, steroids, waxes, edible oils, and, above all, the raw material for medicines. More than 50% of modern medicines come from the natural world. For example, two important anti-cancer compounds are derived from the periwinkle plant found in the forests of Madagascar.

The synthesis of many naturally derived drugs is often enough not commercially feasible and even for those drugs that can be synthesized the chemical blueprints provided by wild plants are often needed.

The centers of origin of many food plants lie in the tropical forest. The world’s food supply depends on maintaining plant resistance to pests and diseases. Resistance is often maintained by crossbreeding with wild populations of the same species. Already too many wild food plant varieties have become extinct.

New breakthroughs also depend on the untouched stock of genes. The gene for the semi-dwarf variety of rice that over the last four decades has transformed Asian agriculture came from a primitive Taiwanese plant and its resistance to virus came from another wild species that probably evolved in the Silent Valley in India.

In the last few years, some countries have led the way in re-foresting vast areas. In Kenya, the late Wangari Maathai led a nationwide movement of women to plant over 50 million trees. For this, she won the Nobel Peace Prize. Three years ago, Ethiopia mobilized its people to plant 350 million trees in one day.

Belatedly world opinion is moving towards a recognition that something must be done. Last week at the COP 26 climate conference in Glasgow in Scotland more than 100 of the world’s leaders voted to halt the destruction of the world’s great forests.  But the secretary-general of the United Nations said “It’s essential that’s the resolution is “implanted now, for people and the planet”. Regrettably, there is no mechanism for tracking further destruction and no monitoring system to ensure it meets its target dates.  Nevertheless, $12 billion in overseas development funds to combat deforestation was pledged by 12 countries.

Recently, Russia, which accounts for one-fifth of the world’s total forests, announced a plan to achieve carbon neutrality by 2060. Russia’s problem is not tree robbers but the increased number of forest fires in the Siberian wilderness and the melting of the permafrost that is releasing methane, a gas that is second only to carbon dioxide in its impact on climate. At Glasgow, 100 nations voted to curb global emissions of methane by 30% by the end of this decade.

A little late, but it is not too late, the world is beginning to wake up to the importance of this heritage. The emerald forests need not die, but mankind must use its wit and will to save them.

For my part, having planted 20 trees in my life- some of which are now very big- I pledge to plant another three every year. Everyone can do their bit. Nearly everyone has room and money for at least one tree. Eight billion new trees planted by the world’s 8 billion people would solve the problem. We should start a worldwide One Tree Movement⸙. Nothing too ambitious, but it would be eminently doable and stunningly effective.

Race IS political. Otherwise, why would Buttegegg [sp] try to make passing a US infrastructure bill to make highways not RACIST? And while racism might persist as a disease, it is none more prevalent than in your head. To you, it’s not racist to teach little children that they are inferior to blacks; that Asian shopkeepers deserve to be beaten up; that Jews are “dirty” and their synagogues should be attacked — that’s not racist. You know there are 2 ways to raise yourself up? One is by changing your mindset and proving that you are worthy; the other is by tearing everyone else down. (Raise the bridge or lower the water). A well-respected American black woman once said of African Americans: we are the only race who puts on a pedestal the worst denominator in our Society. Latinos shun the criminal element; Asians ostracize evil members of their families as an embarrassment but somehow it’s the norm to elevate a criminal black man even though many GOOD black men have no statues in their honor (exception, MLK). Yes, in the past black slavery was a terrible time but the Irish was also enslaved (you don’t hear them bringing it up today); the American Japanese were interned in horrible camps (they are not on your radar). I’m sorry, Panama A1, but no one was born with a promise life would be fair (the elite of any race, perhaps) so you’ll be happier and more successful if you take that chip off your shoulder and stop using race as an excuse for your failures. No white man today enslaves a black man but in only in the minds of the latter. BTW, my family is multi-racial and they are all successful despite your claims, so what’s your excuse for failure? Racism is alive and prospering in your sick head. If, as a Panamanian in your own country you cannot succeed, something is amiss with you, not your country. Could it be your attitude? Just asking!

Thank you for your very helpful and insightful comment MHogan. Can’t seem to see the forest for the politics. Race is not political, it is a disease, and you never got vaccinated did you.

What is the RACE of the trees they will save — they better fall in the “minority” group — BLACK TREES MATTER. Just get feedback from Kamala or the forest will be burned.