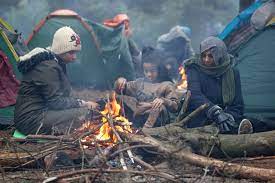 It’s always sad to see migrants up against it- whether it be the deadly waves of the Mediterranean and the Aegean seas, the slow churning processes of the US/Mexican border and, in the case now in the news, of 4,000 or so mainly Kurdish migrants trapped on the Polish/Belarus border.

The migrants are facing Polish soldiers on one side of the barbed wired fence the Poles have built along the border. Behind them, guarding the route the migrants took from Minsk airport, Belarusian soldiers are making sure they don’t give up and try and return home or even look for jobs in Minsk.

Some western media and some Western politicians are trying to make a bad situation worse by accusing Russia of being party to this grim state of affairs. Undoubtedly, some Russian officials have a smirk on their face as they see Belarus’s President Alexander Lukashenko getting his own back for the sanctions imposed on his country early in the summer as a penalty for him rigging the presidential elections.

But to say that President Vladimir Putin is himself complicit is a bridge too far. He has made it very clear he is opposed to the threats, indeed angry about, made by Lukashenko to interfere with the transit of gas through Belarus in an attempt to blackmail the European Union (EU). As Putin has made clear this is Russian gas and only Russia can decide to turn the taps off- which it won’t.

One weathercock of Russian government opinion is what is broadcast on the state-funded RT (Russia Today) television station. On its website, on Saturday it had an interesting article: “Do not call this politically induced humanitarian catastrophe a ‘migrant crisis. Because it’s not. Instead, it is an obstinate clash between a mature authoritarian regime, which runs Belarus, and a nationalist-populist regime with authoritarian ambitions, which runs Poland. The stranded migrants and refugees, abused by both sides, are not the cause of this conflict. Beyond the conflict between the very nasty regime in Minsk and the fairly nasty regime in Warsaw there is also the crisis of the EU- it has simply not done its homework”.

I agree. We are talking about 4,000 would-be migrants. Moreover, this is a pinprick compared with the numbers of Syrians and Africans in 2015 that truly made a crisis of startling proportions. Germany alone took in half a million, later to rise to 1.4 million. But a couple of months later the tide dried up as the will to leave home for an uncertain future waned, and EU patrols at sea aided by ships from Greece and Libya turned migrants back. Moreover, a surge like this has the same chemistry as a stampede. When a few start to run, they panic others behind them. Then it becomes a chain reaction, a mob event, generating even further momentum in a quite irrational way. Then suddenly it stops.

The EU does not need this confrontation on its eastern border. It needs to understand that Lukashenko’s game is overplayed. Already airlines, including those of Turkey, Syria, and Belarus, are refusing to transport those they suspect of being migrants.

It needs to be understood more widely than it is that Iraqi Kurdistan is not a basket case like Syria, Afghanistan, Yemen, or parts of Africa. Sitting on oil, with a well-educated civil service and business class, it has become the most prosperous and safest part of Iraq. There is no need to migrate. Only because Lukashenko decided to order his minions to propagate that Belarus was now issuing cheap visas and that its airline was going to put on more flights did some people (very few) decided to seize the moment and rush to the Polish border where they had been told they could easily slip over into EU territory.

The answer is for the Polish government to move the barb wire fence back 30 meters, let the migrants in, process them quickly in makeshift offices just inside the border, while housing the migrants in weatherproof tents with heating, water, food, and medical help. (In fact none of the Kurds, unlike the Syrians, are refugees fleeing persecution, entitled to stay.) Then they should be put on buses and driven to Warsaw airport for the journey home. 4,000 could be processed within a week.

Burden Sharing
Poland, Hungary, and the Czech Republic led a rear-guard effort at the height of the Syrian/Afghanistan/African migrant crisis in 2015 to rebut the EU’s effort to distribute the migrants around all the 29 countries of Europe. On average this would have meant a modest 30,000 or so for each country. For smaller countries like Poland it would have been at most 25,000, for bigger like France and the UK 100,000. In fact, Sweden took in 205,000, Poland 8,600, and Estonia 525. Only five countries took in more than 100,000. In short, there was no burden-sharing in the EU, which has a policy of burden-sharing on many problems. It must be tempting now for European governments to let Poland be hung out to dry. In 2015 Poland helped sabotage what could have been an equitable system for dealing with migrants. (In this case most of them, unlike the Kurds, were truly refugees.)

As noon, as hunger envelops the country, there may well be a flood of Afghani migrants. It’s important for the EU to look ahead and anticipate this. It means giving the Taliban government all the food that could be needed. It means restarting Western economic aid, held up until the Taliban agree to let girls go to school and women to hold jobs. Averting a famine-driven exodus of Afghanis to Europe is today’s most important priority task.

Besides, there are other ways to help girls and women, as long as the big powers stand together, which should be easy since they all have similar interests. It is to refuse Afghanistan’s new government to belong to the UN and its agencies. (The FAO, the UN’s Food and Agricultural Organization, and WHO, the World Health Organization, would be the exceptions.) This would make it impossible for the Taliban government to raise loans and aid. It would make it impossible for its airline to fly outside of Afghanistan. Indeed, it could halt bus traffic to neighboring countries, since passports would not be recognized.  These restrictions would only be lifted if the Taliban kept to their earlier promise to allow women to work and girls to go to school.

This crisis has its silver lining. It might compel the EU to think through the aftermath of the war in Afghanistan.

Captain there is a big difference in entering a country legal or illegal. Legal immigration can help both parties but storming a border does not. One is invaders the other invited guests. All countries needs to stop invaders. The idea of water cannons on cold nights is a great idea, your only in danger if you choose to be in danger. And they say freezing to death is not bad you just go to sleep and not wake up. Way better than lead in the head

It’s interesting to note that forward projections of population “growths” actually shows a decline across the globe in a few decades time . Falling birth rates and a growing percentage of the elderly in the demographics will translate into a net competition for economically active Human Resources and this current situation will all look very petty . Countries that will benefit will be those that had the foresight to admit immigrants and not put up barbed wire and walls to obstruct their entry . Oh Ya if one million do indeed enter USA remember an equal number will have died from Covid in that country by the time this is all over .

Its getting cold, keep using the water cannons. No country should have to put up with being invaded and if you do not protect your borders you do not have a country. Just look at the USA for example. Brandon has let 1 million invades since he was installed