WORLDVIEW: No war with Russia over Ukraine 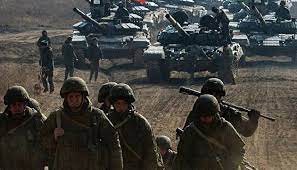 “European Union and Nato allies have swung behind the Biden administration’s assessment that Russia may be poised to invade Ukraine following unprecedented sharing of US intelligence on Moscow’s military preparations”, reported yesterday’s Financial Times. Today, it is said, President Joe Biden in a video link will warn President Vladimir Putin of the consequences of such an invasion. Putin will likely reply that there can be no consequences for an event that is not going to happen.

We’ve been here before. Two years ago, the senior French general in Nato made the same prediction, saying the French intelligence service had informed him of an impending invasion. He wished himself to be right. But he was wrong. That is likely to be true this time. As I argued last week, what would Russia gain by ruling Ukraine?  The leaders of the Nato countries seem to have remembered nothing, learnt nothing and know nothing.

Ukraine is no threat to Russia. it would be very difficult to occupy such a large country and keep its people suppressed.  It would cost Russia a lot of money, not just the military costs but the cost of keeping a moribund and corrupt economy alive, not least the decaying rust-belt Russian-speaking provinces which are presently occupied by pro-Russian, Ukrainian, militias. To be ironic, Russia doesn’t feel threatened by Ukraine, only by Nato, so to be logical its first priority should be to invade Nato countries not Ukraine.

Now, you might say, I’m making the argument that Russia is preparing to invade Ukraine look ridiculous. It is ridiculous. No apologies here.

Most Russians supported Russia’s takeover of Crimea, an appendage of Ukraine, not least because Crimea on the Black Sea is the home of one of Russia’s most important naval bases. But taking over Ukraine is another matter. Crimea was part of Russia until the premier of Russia, Nikita Khrushchev, decided to make a present of it to Ukraine- an internal transaction, meaningless politically because in Soviet times Ukraine was part of the Soviet Union.

I very much doubt that the Russian people would support a long, protracted war in Ukraine with nearly all the world perhaps even including China, condemning their country at the United Nations for breaking its Charter. (I wouldn’t. I was also opposed to the take-over of Crimea because the referendum in which Crimeans voted to re-join Russia was not fair and free and thus broke international law.)

We need to seek the perspective of history. A dispatch in yesterday’s New York Times by its Moscow correspondent, had it right: “But to Mr. Putin — and many other Russians — the nearly eight-year-old conflict with Ukraine is not simply about geopolitics; it is about a hurt national psyche, a historical injustice to be set right. One of his former advisers, Gleb Pavlovsky, in an interview described the Kremlin’s view of Ukraine as a “trauma wrapped in a trauma” — the dissolution of the Soviet Union coupled with the separation of a nation Russians long viewed as simply an extension of their own.”

Russia and Ukraine were one and the same people for centuries. They are both descended from the peoples and institutions of medieval Kievan Rus’, built around where modern Kiev, the capital of Ukraine, is located. It was not a unique feudal state separate from the other Russian principalities, writes Gordan Hahn in a new book: “Kiev’s grand princes were often natives of other Russian principalities, over which they ruled as the Kievan grand prince. They distributed their sons across the other Russian principalities located in both today’s Russia and today’s Ukraine. They all spoke the same old Slavic language, which is closer to today’s Russian than to today’s Ukrainian language”.

Earlier there had been the establishment of the “Second Rome”, Constantinople, the city which was the new headquarters of the Christian church. It had been moved away from corrupt Rome by the Emperor Constantine. It became the home of Orthodox Christianity. Then a thousand years later when the Ottomans sacked the city the headquarters of Orthodoxy moved to Kiev and then to Moscow with the Kievan Rus’ grand princes spreading the new religion from Kiev across all of Russia. Kievan grand princes built the main church in Novgorod and founded Moscow. Moscow was called the “Third Rome”. Indeed, Moscow has more claim to be the inheritor of the church of Jesus and Paul than Rome- or for that matter Canterbury, Wittenberg, or Geneva.

There was no word ‘Ukraine’ or ‘Ukrainians’ as an ethnic or state-territorial term until the 19th century. Parts or all of the lands that are part of Ukraine today contributed to a common identity and culture from the time of the Mongol occupation until the 19th century. By the mid-19th century, a separate Ukrainian national identity was largely formed and more broadly diffused beyond a narrow national intelligentsia, under the proactive influence of Poland and Austria-Hungary as a way of weakening Russia. Later the Soviet-era reversed this, worked to reinforce the common nature of their historical and cultural experience. World War 2 reinforced this brotherhood even more so.

The Soviet Union’s formation of a Ukrainian Soviet Socialist Republic helped consolidate and deepen a sense of Ukrainian identity, despite the repression of the Ukrainian language.

The funny side
Today it is the Russian language that is being repressed by the Ukrainian government of President Volodymyr Zelensky. This is rather contradictory, even amusing. Before he became president Zelensky was a professional comedian who gave his monologues in Russian and took his show all over Russia.

All these people, living in Russia, mainly in Moscow and St Petersburg, together with hundreds of thousands of ordinary Ukrainians, not least students of all kinds and many of their professors, have a good deal of influence, albeit indirectly. Given that a war with Ukraine would be one that these Ukrainians together with ordinary Russians would not want, Putin would face immense resistance, even if this is what he wanted to do.

There’s may be a good argument for Ukraine being part of “greater” Russia but it can’t be achieved by war. There is an even more powerful argument about Ukraine not being too beholden to either the West or Russia, and certainly not being part of Nato[jp1] . Ukraine should be left as its saner people want it to be: equally orientated to both east and west economically, democratic, observant of human rights, a major contributor of soldiers to UN peacekeeping which Russia is not, continuing to share the many common features of their culture including religion and the arts, and determined to find a way to peace in Donbass, the dissident, pro-Russian province.

Russia is not going to invade Ukraine. Biden and his colleagues in Nato need to drop their Ukrainian obsession and get on with building a durable peace with Russia, and between Russia and Ukraine.