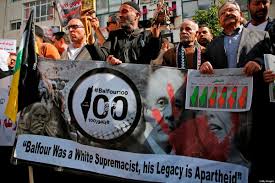 PANESTIANS demonstrate in the occupied West Bank in 1917 on the anniversary of the Balfour Declaration.

Perhaps the biggest single misthink in Western history is best understood by standing in the town square of Bethlehem, allowing one’s gaze to pass over the rooftop of the Church that covers the stable where Jesus was supposedly born, and let one’s eye drift into the blue sky beyond and thinking: how on earth could it be that the Christians, whose belief in the divine center around Jesus’ crucifixion carried out by Roman soldiers but done at the behest of the Jewish populace, could turn round nearly two millennia later and say to the Jews in effect: we buy the argument that you are God’s chosen people and this land is your land and we are going to turn it over to you as your “national home”, even though the Arabs or their forefathers have been living here since the Romans kicked the Jews out of Babylon after demolishing the Temple in AD 70. This is what British foreign secretary, Arthur Balfour, did in his famous Declaration, strongly backed by prime minister Lloyd George, a religious man who saw the Jewish cause as one that must be supported by Christian charity.

The British had taken Palestine following the break-up of the Ottoman Empire during World War 1. The Balfour Declaration of 1917 at best was an emotional cause, at worst a political adventure. The next generation of British politicians and colonial administrators, faced with a bloody Arab revolt that they had to mercilessly repress, felt that the British had made an awful mistake.

A more recent misthink: How could it be that the Jews of today could elect as prime minister in the year 2001 Ariel Sharon when they had been voting for a peace candidate barely two years before? Sharon’s most successful campaign trick was to walk with a muscular entourage across the courtyard of Jerusalem’s Dome of the Rock, the sacred Islamic territory from where Mohammed ascended to heaven for a night and claim this as Jewish territory forever because down below are the remains of the Temple that the Romans destroyed.

In helping provoke the second Intifada (uprising) and thus undermining the democratically elected government of Palestine to the great advantage of the militant Hamas, he showed both his irresponsibility and his total contempt for 1400 years of the continuous Muslim presence. How would Christians have felt if he had strutted across the Piazza in front of St Peter’s and made a speech that slighted Christian claims to that piece of earth? How would the Jews have felt if the Palestinians had suspended political banners from the Dome at the top of the hill down over the sacred Wailing Wall below? Is there no sense of consistency or basic justice in the Israeli body politic? What is the point of subscribing to a religion of values if one can be so easily led by the nose by an unscrupulous politician out for power and vainglory and careless of human life that gets in his way? And aren’t the Jews as a rather small religious group the ones who have the most to lose if religious tolerance is undermined?

Christians are meant to turn the other cheek. The Jews have long been satisfied with an eye for an eye. But both religions have stressed the need for justice and for consideration of how those one is dealing with might feel. “Do unto others what you want them to do to you” is part of both Old and New Testament teaching. Neither Balfour nor Sharon appears to have possessed a profound notion of the core values of their religion.

The Jewish notion that they can have this land and no one else can is so wildly anachronistic by any Western standards or historical experience that it is amazing that in 1917 it got the time of day. If every ethnic group in the world asserted so vigorously ancient yearnings to exclusive possession, the world would become totally chaotic in a short time, and nowhere quicker than North America itself. China united by the Mongol invasion would have to be today subject to the rule of Mongolia.

The Promised Land
Also overlooked is that Palestine was described in the 12th century before Christ as an area of land between modern-day Tel Aviv and Gaza. This was around the time Moses led the Jews out of Egypt to find the “Promised Land”. Moses led the Jewish troops up towards modern-day Israel, fighting a number of tribes on the way. When it came to the most vigorous of their opponents, the Midianites, Moses said, according to the Bible‘s Book of Numbers in the Old Testament (in the Jewish Torah) that all the Midianites must be killed including women and children, apart from young virgins who must be married off to Jewish soldiers.

This passage in the Old Testament is very rarely referred to by Jews, Christians, or Muslims. It is rarely mentioned in today’s books on Jewish history, nor in the Encyclopedia Britannica,  Why should Israel get a free pass today? If the Jews want to believe that Temple Mount (on which the Dome of the Rock is built) is “the focal point of creation” and that in the center of the hill lies the “foundation stone” of the world and that here “Adam came into being” they may be allowed to believe it. But that the arbiters of the United Nations, including the U.S., Russia and Europe could go along with this myth at the expense of traditional Palestinian centuries-old occupancy rights is almost impossible to digest.

And the worst of it is that even liberal voices in the Western political world calling today for Israel to compromise seem to accept that even if the Palestinians recovered all of the pre-1967 territories on the West Bank they would still only have barely 20% of the land that the United Nations divided into Jewish and Arab states in 1948 when the British withdrew.

I have long been a supporter of the Jews, as those who read my latest book on war crimes will see (Ending War Crimes, Chasing the War Criminals). The Holocaust was the most horrific act in human history. But I can’t support Judaism when its believers put their head in the sand.

The Jews must start to grapple honestly with their past. They have no moral or Biblical right to do what they have done to the Palestinians over the last century.

It was just reported that Fauci made a fortune during the pandemic.

World Command Headquarters is on to you Butler. We are aiming the Jewish Space lasers at your home now. Bwahahah!

In addition to being a world renown virologist and immunologist whose advice about horse dewormer and urine drinking you should absolutely take, I am also a psychiatrist who can diagnose people whom I’ve never even met! But I know they are persecuting me.

One of the most common tactics of the psychopath is the act of projection, wherein the psychopath projects onto, i.e. blames, his nemeses for his own well known deficiencies or crimes.

I am under the delusion than anyone gives a shit what I think or say. Therefore, I babble.

The Jews should just drink urine like us. https://m.youtube.com/watch?v=YpXrUW5vhkQ. Yes, I know Hitler killed himself and I said that last thing. But I strongly recommend you eat horse dewormer and drink urine. Believe me. We are smart.

Those Palestinians only have to hang in there a few more years because at the rate the Jews are taking the clot shot the land will be void of life soon. Hitler is likely rolling in his grave saying i never thought it could be that easy to get someone to kill themselves

Can't seem to find my ten foot pole. Oh well, you'd have to be suicidal to touch this article with a ten foot pole anyway, so no great loss.